In the wake of last month’s record-high natural gas prices in the physical market, the Energy Information Administration (EIA) is raising its projected 2021 Henry Hub spot price average to $3.14/MMBtu. 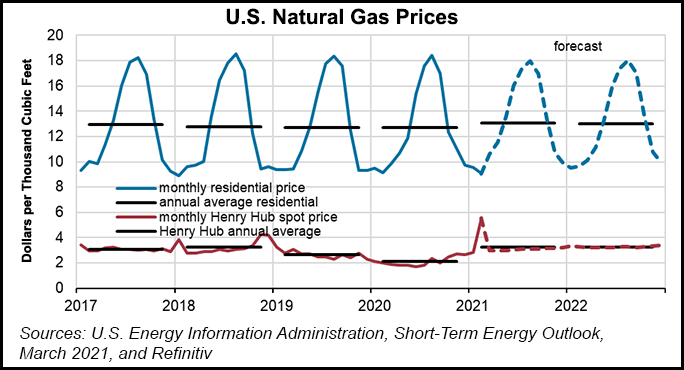 The updated projection, issued on Tuesday as part of the agency’s latest Short-Term Energy Outlook (STEO), is nearly 20 cents higher than the $2.95 average Henry Hub spot price for 2021 that was predicted in last month’s STEO.

A well documented stretch of intense cold coupled with widespread production freeze-offs last month saw the average Henry Hub spot price soar to $5.35 in February, up from $2.71 in January, according to EIA.

Coming down from the surge in February prices, Henry Hub is expected to average $2.88 in 2Q2021. Longer term, EIA expects continued growth in liquefied natural gas (LNG) exports and “relatively flat” domestic production to help push Henry Hub to an average of $3.16 in 2022.

Withdrawals from U.S. natural gas stocks totaled an estimated 829 Bcf in February, the largest February withdrawal on record, according to the agency. The 829 Bcf pull for the month also far exceeded the 452 Bcf five-year average withdrawal for the period.

Domestic consumption totaled a record-high 111.8 Bcf/d in February on a combination of widespread demand for natural gas for both heating and power generation, according to the latest STEO. Consumption will decline in March amid moderating temperatures, the agency said.

Total 2021 domestic consumption is expected to average 82.5 Bcf/d, down 0.9% from 2020 levels on lower demand for power generation because of higher natural gas prices, EIA said. Residential (up 0.4 Bcf/d), commercial (up 0.7 Bcf/d) and industrial (up 1.3 Bcf/d) demand are all expected to see year/year increases in 2021.

U.S. dry natural gas production averaged 87.8 Bcf/d in February, down from 92.4 Bcf/d in December, according to the STEO. Agency researchers pointed to last month’s freeze-offs to account for the lower supply volume.

Looking ahead, EIA expects production to average 91.4 Bcf/d for 2021, an increase of 0.9 Bcf/d from its forecast last month.

U.S. LNG exports declined 2.3 Bcf/d, or 23%, from January to February. The 7.5 Bcf/d exported on average in February reflected “logistical constraints associated with suspending piloting services on several days at some U.S. LNG export ports located in the Gulf of Mexico because of inclement weather,” EIA said.

The frigid temperatures and lower production during the month also led to declines in feedstock to several export facilities, including the Freeport, Cameron and Corpus Christi terminals, the agency said.

EIA said it expects U.S. LNG exports to “continue their seasonal decline from March through May, averaging 7.8 Bcf/d in this period.”