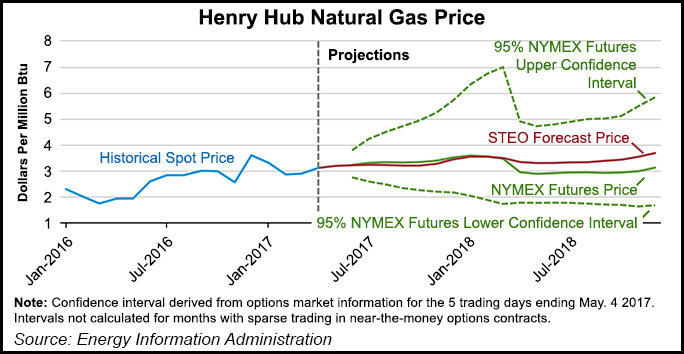 The front-month natural gas contract for delivery at Henry Hub increased by 6 cents/MMBtu from April 3, settling at $3.19/MMBtu on May 4, EIA said. Nymex contract values for August 2017 delivery traded during the five-day period ending May 4 suggest a price range from $2.47/MMBtu to $4.49/MMBtu encompasses the market expectation of Henry Hub natural gas prices in August 2017 at the 95% confidence level, EIA said.

“On April 27, the front-month futures contract moved from the May delivery contract to the June delivery contract, which was priced higher to account for increased summer demand for natural gas power generation. The natural gas spot price averaged $3.10/MMBtu in April, up 22 cents/MMBtu from March,” EIA said.

On Thursday, EIA reported a storage build of 67 Bcf for the week ending April 28, about 6 Bcf greater than what the market was expecting. Inventories now stand at 2,256 Bcf and are 359 Bcf less than last year and 303 Bcf greater than the five-year average.

“For the four weeks ending April 28, natural gas storage injections averaged 51 Bcf per week, almost 10 Bcf per week more than the five-year average build for those weeks,” EIA said in the STEO. “With these storage injections, stocks increased well above the five-year average level for April, although they remain below last year’s level. With natural gas production returning to growth in recent months after declining in 2016, higher natural gas exports have helped moderate inventory builds this year.”

At the end of 2016, the 12-month moving average of consumption plus exports rose above production plus imports and remained higher through April. EIA said it expects that trend to continue through the rest of 2017, “putting modest upward pressure on prices.”