Citing a recent decision by the Organization of the Petroleum Exporting Countries and its allies (OPEC-plus) to limit production, the U.S. Energy Information Administration (EIA) on Tuesday raised its forecast for 1Q2021 Brent crude oil prices to $47/bbl, up $5 from projections issued a month earlier. 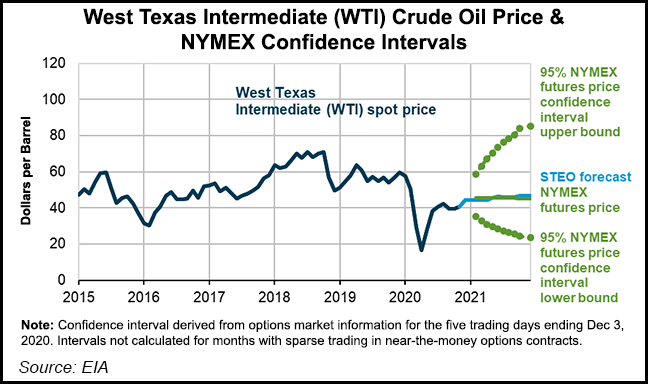 For full-year 2021, EIA expects Brent to average $49, up from an expected average of $43 for 4Q2020. The agency predicted that “while inventories will remain high, they will decline with rising global oil demand and restrained OPEC-plus oil production.” Prices are set to climb from $47 in 1Q2021 to $50 by 4Q2021, according to EIA.

Brent spot prices averaged $43 in November, a $3 month/month increase, EIA said, attributing the rising prices to market expectations that OPEC-plus would seek to delay or limit production increases and “news about the viability of multiple Covid-19 vaccines.”

With natural gas stockpiles higher than previously expected on warmer-than-normal winter temperatures to date, EIA said it’s slashing its forecast for average January natural gas spot prices to $3.10/MMBtu, down from $3.42 predicted a month ago.

EIA’s lowered forecast for benchmark Henry Hub follows a stretch of milder weather that saw November spot prices at the benchmark average $2.61, up slightly from the October average of $2.39.

“Price increases last month were moderated by significantly warmer-than-normal temperatures, which reduced residential space heating demand for natural gas despite many remaining at home in response to the pandemic,” EIA said.

Helping quantify the extent to which mild temperatures have cut into space heating demand so far this winter, withdrawals from U.S. natural gas storage totaled only 20 Bcf for November, sharply below the 103 Bcf five-year average withdrawal for the month.

This came on the heels of end-of-October inventories that clocked in at close to 4.0 Tcf, 5% higher than the five-year average and the second-highest level on record for the time of year, according to the agency.

While warmer-than-normal temperatures have yielded lower-than-expected withdrawals so far this season, “declines in U.S. natural gas production this winter compared with last winter will more than offset the declines in natural gas consumption, which will contribute to inventory withdrawals outpacing the five-year average” between now and the end of March.

EIA forecast a storage carryout of 1.6 Tcf for end-of-March 2021, 15% lower than the prior five-year average.

LNG demand is expected to continue rising, driven by expectations for colder-than-normal winter weather in Northern Asia and Europe, along with coal plant closures in South Korea that figure to increase demand for natural gas-fired electric generation there, EIA said.