Additional U.S. power generation capacity is projected to slow in about three years and remain below average through 2040, but natural gas will serve as the primary fuel source for those additions, according to the U.S. Energy Information Administration (EIA). 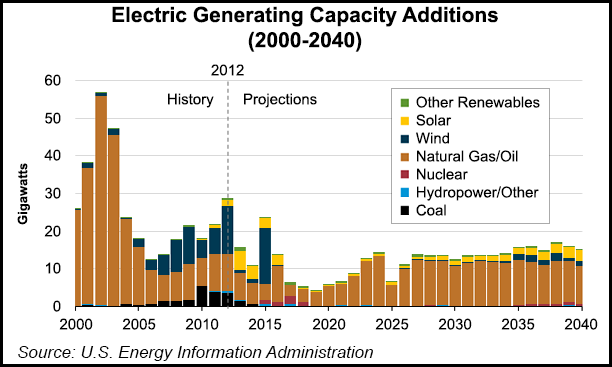 In a “Today in Energy” brief released Wednesday, the EIA said a reference case in its Annual Energy Outlook for 2014 (AEO2014) projects the electric power and end-use sectors will add 351 gigawatts (GW) of electric generating capacity between 2013 and 2040.

“Projected future capacity additions are well below the average annual levels observed in recent history,” EIA said, adding that near-term additions, those considered through 2016, will average 16 GW per year, followed by additions of nine GW/year through 2022 “as the existing generating fleet will be sufficient to meet expected demand growth in most regions.”

The agency said annual additions are expected to increase to 14 GW/year between 2025 and 2040, but remain below recent levels.

“A boom in construction of new natural gas-fired plants began in 2000, largely driven by independent power producers in response to deregulation in the electric power sector,” EIA said, adding that U.S. electric generating capacity additions averaged 35 GW/year between 2000 and 2005. “Almost all of the capacity added during those years was natural gas-fired and about two-thirds uses efficient combined-cycle technology.”

EIA said between 2006 and 2012, annual average capacity additions dropped to 19 GW/year, 45% of which came from natural gas-fired technologies, but 42% came from renewables.

Under low and high economic growth rate cases in AEO2014, total capacity additions between 2013 and 2040 are projected to be 263 and 482 GW, respectively. A low electricity demand growth case predicted total electricity demand in 2040 at a rate 17% below the reference case and with total electric capacity additions about half (174 GW) that of the reference case (351 GW).

In addition, EIA examined a “no sunset case,” where it assumed existing federal energy policies — including production and investment tax credits for renewables — were extended. The result would be an additional 265 GW of new renewable capacity additions between 2013 and 2040.

California’s chief utility regulator last week warned Pacific Gas and Electric Co. (PG&E) that it may face more oversight because of alleged shortcomings in its safety practices.  California Public Utilities Commission (CPUC) President Marybel Batjer warned the San Francisco-based combination utility that it may be in violation of some of the six-part enhanced oversight as…