Natural gas production from seven key U.S. onshore regions is set to decline from May to June, while oil supply is poised for growth thanks to output from the Permian Basin, according to the Energy Information Administration (EIA). 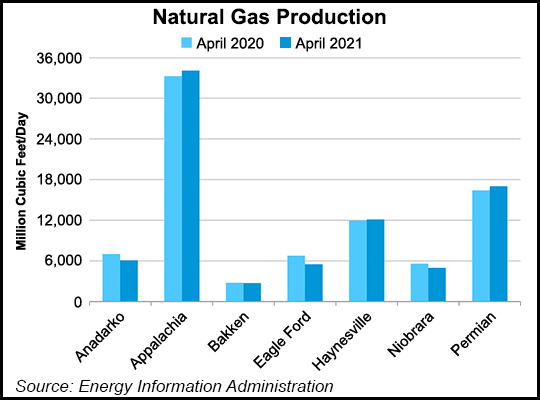 In its latest Drilling Productivity Report (DPR), EIA said it expects the Anadarko, Appalachia and Permian basins, as well as the Bakken, Eagle Ford, Haynesville and Niobrara shales, to produce a combined 83.571 Bcf/d in June, down 53 MMcf/d from 83.624 Bcf/d produced in May.

The Haynesville (up 118 MMcf/d) and the Permian (up 59 MMcf/d) are each expected to grow output month/month, while the Anadarko (down 50 MMcf/d), Appalachia (down 52 MMcf/d), Bakken (down 55 MMcf/d), Eagle Ford (down 32 MMcf/d) and Niobrara (down 41 MMcf/d) are on track for month/month declines, according to EIA.

Meanwhile, oil production from the seven regions is projected to average a combined 7.733 million b/d in June, up slightly from an estimated 7.707 million b/d in May.

The overall backlog of drilled but uncompleted (DUC) wells across the seven regions declined by 241 to 6,857 from March to April, the latest DPR data show. The Permian, with the largest backlog to begin with, posted the largest month/month decline, lowering its DUC total by 121 to 2,932.