The Permian Basin and Haynesville Shale are expected to spur an overall increase in natural gas production among seven key U.S. producing regions in August, according to updated projections from the Energy Information Administration (EIA). 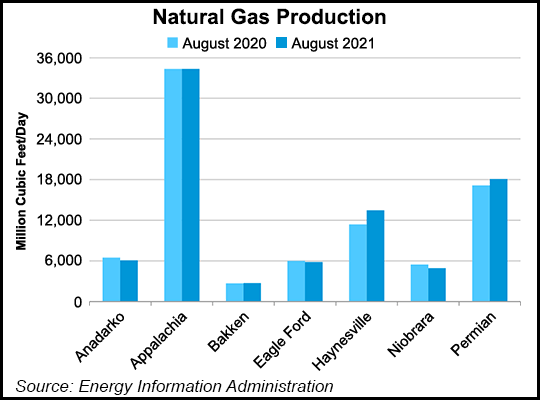 The agency said in its latest Drilling Productivity Report, released Monday, that it expects natural gas output from seven key producing regions in the U.S. onshore to climb to 85.506 Bcf/d in August, up 46 MMcf/d from 85.460 Bcf/d in July.

The seven regions included in EIA’s DPR data are the Anadarko, Appalachia and Permian basins, along with the Bakken, Eagle Ford, Haynesville and Niobrara shales. Among the seven plays, growth from the Haynesville (up 145 MMcf/d) and the Permian (up 46 MMcf/d) is expected to offset declining production from the other regions.

Oil production from the seven regions, meanwhile, is expected to rise by 42,000 b/d from July to August to reach just over 7.9 million b/d, the agency said. The Permian is expected to be the main driver of output growth, adding a projected 53,000 b/d of production month/month, with Appalachia contributing an incremental 2,000 b/d of output for the period.

The total number of drilled but uncompleted wells (DUC) across the seven regions fell by 269 to 6,252 from May to June, according to EIA. The Permian drew down its DUC count by 123 month/month to 2,475. The Anadarko (down 19), Appalachia (down 17), Bakken (down 28), Eagle Ford (down 41) and Niobrara (down 41) also drew down their respective DUC backlogs from May to June. Total Haynesville DUC went unchanged at 392 during the period.