Brent crude prices gained $5/bbl from May to June and are on track to average $72 during the second half of 2021 (2H2021), the Energy Information Administration (EIA) said in an updated forecast published Wednesday. 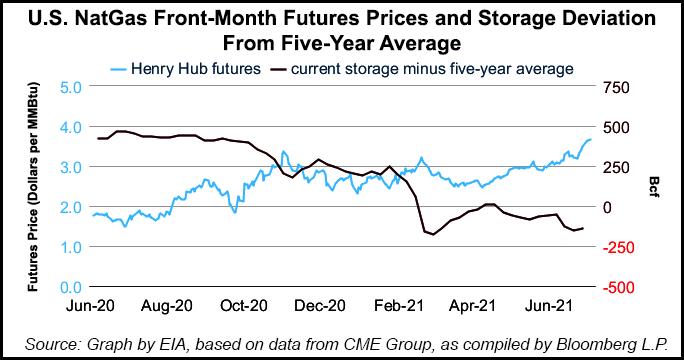 Brent prices rose to $73 in June, up $5 month/month and up $33 from year-ago prices, EIA said. Rising production should “reduce the persistent global oil inventory draws” observed over the past year and help to stabilize prices around current levels, according to the July edition of the agency’s Short-Term Energy Outlook (STEO).

In last month’s STEO, EIA had called for Brent to average $68 during the third quarter.

Continuing output increases in 2022 from the Organization of the Petroleum Exporting Countries and its allies, along with “accelerating growth” from Lower 48 tight oil producers, among other sources of supply growth, will see prices slide next year, researchers said. With supply growth expected to outpace global consumption, EIA said it forecasts an average Brent price of $67 in 2022.

After increasing by an estimated 6.3 million b/d in the first half of 2020, global liquid fuels inventories declined by 2.1 million b/d on average through 2H2020 and the first six months of this year, EIA said.

The strong demand within U.S. borders during the month coincided with continued “high levels” of liquefied natural gas exports, which averaged an estimated 9.0 Bcf/d in June, a record for the month, according to EIA.

U.S. natural gas stockpiles ended June 25 at a 143 Bcf deficit to the five-year average, compared with a 61 Bcf deficit for the week ending May 28, the agency said.

June saw strong demand for natural gas in electric generation. However, EIA still expects less use of the fuel in the power sector because higher prices this year should result in an overall decline in domestic consumption of 1.1% from 2020 levels. Domestic consumption is expected to then climb 0.7% year/year in 2022.

“Because we expect higher natural gas prices, we forecast coal’s generation share to rise from 20% in 2020 to 24% this year but to fall to 22% next year,” researchers said.

EIA expects total energy-related carbon dioxide emissions to increase 7.1% this year and another 1.5% in 2022. Those increases would follow an 11.1% 2020 emissions decline.

“Even with growth over the next two years, forecast emissions in 2022 remain 3.3% lower than in 2019,” researchers said.