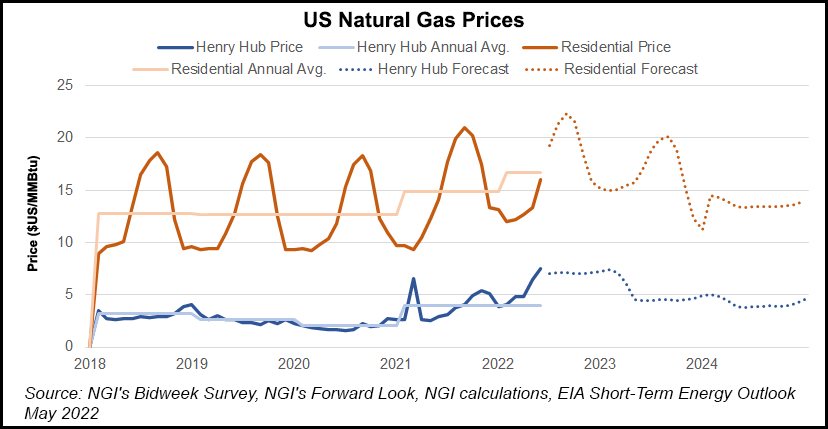 Commercial inventories in the OECD (aka Organisation for Economic Co-operation and Development) stood at an estimated 2.63 billion bbl as of the end of the first quarter, EIA said. That was up slightly from February levels, which were the lowest since April 2014, the agency said.

The outlook for Brent remains “highly uncertain,” with price outcomes dependent on how efforts to sanction Russia impact the country’s oil production and sales, according to the latest STEO.

“We completed this outlook on May 5, therefore, it does not include a European Union ban on oil imports from Russia,” researchers said. “However, the bans being reported at the time of writing would likely contribute to tighter oil balances and higher oil prices than our current forecast. In addition, the degree to which other oil producers respond to current oil prices and the effects macroeconomic developments might have on global oil demand will be important for oil price formation in the coming months.”

The May STEO incorporated a reduction in Russian oil production compared to last month’s forecast. EIA said it expects oil markets to be “mostly balanced” between 2Q2022 and the end of 2023.

“Because oil inventories are currently low, we expect downward oil price pressure will be limited, and market conditions will exist for significant price volatility,” researchers said.

Meanwhile, with storage levels expected to lag behind the five-year average this summer, Henry Hub natural gas spot prices are expected to soar to $8.59/MMBtu on average in the second half of this year, according to the updated STEO.

Henry Hub prices are forecast to average $7.83 for the second quarter after averaging $6.59 for April, EIA said. The April 2022 Henry Hub average represented a whopping $4.90 increase over the April 2021 average of $2.66, the agency said.

“Natural gas prices could rise significantly above forecast levels if summer temperatures are hotter than assumed in this forecast and electricity demand is higher,” researchers said.

The STEO cited forecasting from the National Oceanic and Atmospheric Administration, which predicted a 6.5% decrease in U.S. cooling degree days for June through August versus the year-earlier period.

U.S. natural gas inventories exited April at an estimated 1.6 Tcf, or 17% below the five-year average, EIA said. Higher demand for heating and “relatively flat production” saw injections total a below-average 190 Bcf for the month. A 418 Bcf injection for May projected in the latest STEO would narrow the year-on-five-year deficit to 14%.

“We forecast that natural gas inventories will end the 2022 injection season at almost 3.4 Tcf, which is 9% below the five-year average,” researchers said. “However, summer temperatures will be key to storage, and a hotter-than-normal summer that results in high electricity demand could cause inventories to be lower than forecast.”

This comes as exports via liquefied natural gas (LNG) are forecast to average 12.1 Bcf/d from May through August, the latest STEO shows. Overall, U.S. LNG exports are on pace for 23% year/year growth in 2022, the agency said.

The summer LNG export forecast for 2022 “reflects our assumption of slightly lower LNG demand in Asia and Europe this summer compared with our previous assumption, in part because of sustained high natural gas prices,” according to EIA.

A lack of new export facilities will limit LNG export growth in 2023, with exports expected to climb 5% to 12.6 Bcf/d, according to the latest STEO.

“Although production in April was lower than the recent peak in December 2021, it increased in each of the past two months,” the agency said.

This forecast production growth in 2023, alongside slowing growth in both LNG exports and demand, will help push storage levels higher next year, EIA predicted. Henry Hub spot prices will consequently average $4.74 in 2023, according to the STEO forecast.