The U.S. Energy Information Administration (EIA) said natural gas production in Pennsylvania increased 69% in 2012, despite a reduction in drilling activity. 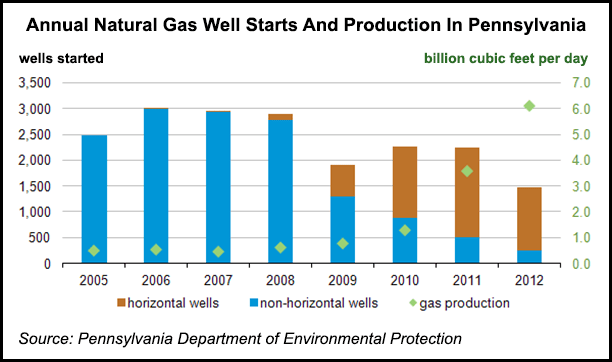 According to the EIA, data from the Pennsylvania Department of Environmental Protection (DEP) showed natural gas production in the Keystone State averaged 6.1 Bcf/d in 2012, up from 3.6 Bcf/d in 2011.

“While accelerated drilling in recent years, primarily in the Marcellus Shale formation, significantly boosted Pennsylvania’s natural gas production, increases were restricted by the state’s limited pipeline and processing infrastructure,” the EIA said Thursday. “This created a large backlog of wells that were drilled but not brought online.”

The EIA said data from the DEP indicated that a significant portion of the wells that began producing in 2012 had actually been drilled earlier. “As infrastructure expanded, these wells were gradually connected to pipelines, sustaining natural gas production increases through 2012 despite the decline in new natural gas well starts,” the EIA said.

Earlier this month, energy analysts with Barclays Capital said there is currently enough of a drilling backlog in the Marcellus that if wells were brought online over a one-year period, production would continue to grow but at a slower pace (see Shale Daily, March 8). They said DEP data showed a backlog of 1,432 unconventional wells during the second half of 2012.

There were 104 rigs operating in the entire Marcellus Shale during the week ending March 15, a figure unchanged from the week prior but down 33% (155 rigs) from one year ago, according to NGI’s Shale Daily Unconventional Rig Count. Even with those declines, the Marcellus remains one of the most active shale plays in the country, with a greater number of rigs operating in only the Eagle Ford (221) and Bakken/Sanish/Three Forks (203).

Also noteworthy, the EIA said, were Marcellus Shale operators reducing their drilling times and achieving higher production per well, which the agency attributed to improvements in drilling and completion techniques.

“The increased use of horizontal drilling and hydraulic fracturing, particularly in the more geologically favorable portions of the Marcellus, allows for more production per well,” the EIA said. “As operators continue to improve well completion techniques, they are achieving higher initial per-well production rates and boosting overall production.”

Earlier this month, DEP production reports showed natural gas production from unconventional sources in Pennsylvania hit a record 2.04 Tcf in 2012, edging ahead of the Barnett Shale in Texas for the first time (see Shale Daily, March 6).

The DEP’s Office of Oil and Gas Management currently publishes six-month reports covering all production from unconventional wells, and does not break it down by shale/tight gas and oil plays. The DEP said the change was mandated by Act 13, the state’s omnibus Marcellus Shale law (see Shale Daily, Feb. 15, 2012).