The U.S. Energy Information Administration (EIA) projects that an additional 60 gigawatts (GW) of coal-fired generating capacity will be retired by 2020. It also said natural gas prices will rise in the near term, in part due to increased demand by industrial customers and, eventually, demand for exports from liquefied natural gas (LNG) facilities. 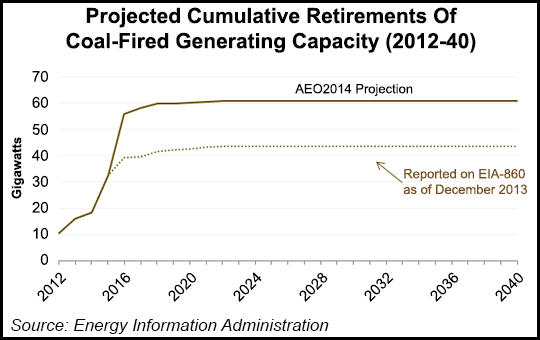 According to an 18-page Early Release Overview of the EIA’s Annual Energy Outlook (AEO), coal faces a dim future for power generation due to slow growth in electricity demand, competitive prices for natural gas, programs that encourage the use of renewable fuels, and the implementation of new environmental regulations, especially the Clear Air Interstate Rule (CAIR) and the Mercury and Air Toxics Standards (MATS), the latter to take effect in 2016.

“Coal-fired power generation over the next few years is slightly higher in AEO2014 than in the AEO2013 Reference case because of higher natural gas prices during that period, as well as pending nuclear retirements that necessitate additional baseload generation,” EIA said. “After 2020, generation from coal flattens out and remains lower than projected in AEO2013 because more coal-fired capacity is retired and fewer new coal plants are built.”

“Market concerns about GHG [greenhouse gas] emissions continue to dampen the expansion of coal-fired capacity in the AEO2014 Reference case, even with the assumption of current laws and policies,” EIA said. “Low fuel prices for new natural gas-fired plants also affect the relative economics of coal-fired capacity, as does the continued rise in construction costs for new coal-fired power plants.

“As retirements far outpace new additions, total coal-fired generating capacity falls from 310 GW in 2012 to 262 GW in 2040 in the AEO2014 Reference case. [But] as with all projections, projected generation shares are highly sensitive to both fuel prices and changes in policies and regulations. Alternative cases in the full AEO2014 will quantify these sensitivities.”

EIA is expected to release the full AEO2014 report in the spring. The agency added that its projection for the first few years for natural gas used in electricity generation is slightly lower in the AEO2014 Reference case, compared to the AEO2013 Reference case, due to higher natural gas prices in AEO2014 (see Daily GPI, March 19, 2013; Dec. 6, 2012).

On the issue of natural gas prices, EIA said the Henry Hub spot price is higher in the AEO2014 Reference case than what was projected in AEO2013 through 2037. Specifically, the agency said the Henry Hub spot price for natural gas reported in AEO2014 reaches $4.80/MMBtu (in 2012 dollars) by 2018, which is 77 cents/MMBtu higher than in the AEO2013 estimate.

“Price increases in the near term [will be] driven by faster growth of consumption in the industrial and electric power sectors and, later, growing demand for export at LNG facilities,” EIA said. “A sustained increase in production follows, leading to slower price growth over the rest of the projection period.

“The stronger near-term price growth is followed by a lagged increase in supply from producers, eventually causing prices to settle at $4.38/MMBtu in 2020, which is still notably higher than in AEO2013.”

EIA said that after 2020, increases in natural gas spot prices will driven by sustained, but slower, domestic demand and net exports. The agency projects Henry Hub prices will rise to $7.65/MMBtu and gas production will grow to 37.5 Tcf in 2040. Both figures are lower than AEO2013, which had predicted a price 4% higher and production of 33.1 Tcf.

“A price increase starting in 2033 is far less pronounced than was projected in AEO2013, in part because the growth in net exports from the United States slows significantly,” EIA said.