In its latest Short Term Energy Outlook (STEO), the Energy Information Administration (EIA) nudged down is Henry Hub natural gas price forecast for this year and next and predicted that coal-fired power plants will retain their recent gains over gas-fueled facilities. The gas production outlook held steady with last month’s STEO. 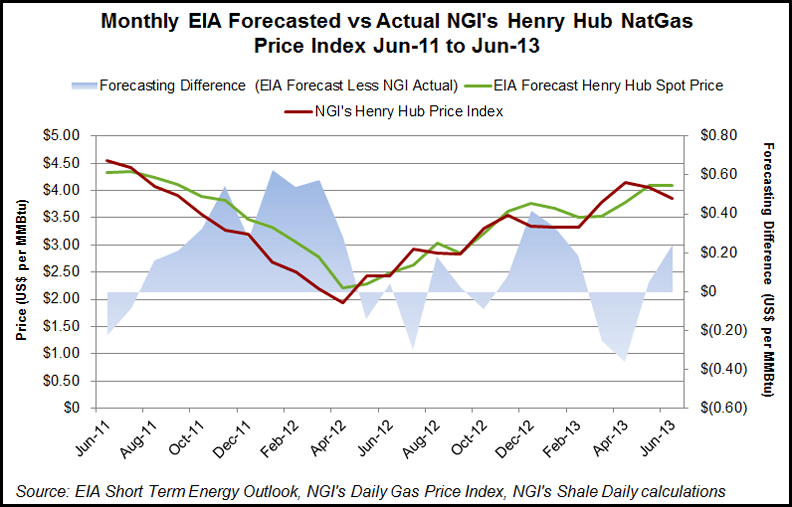 According to NGI calculations, which take into account EIA forecasts and NGI‘s Henry Hub Price Index, the EIA on average has shown a positive forecasting bias of 15 cents in its STEO over the past two years (see chart). This being the case, it might be reasonable to expect an even more pronounced drop in actual spot market prices this year, with everything else being equal.

Natural gas futures prices for October delivery (for the five-day period ending July 3) averaged $3.62/MMBtu. Current options and futures prices imply that market participants place the lower and upper bounds for the 95% confidence interval for October 2013 contracts at $2.69/MMBtu and $4.88/MMBtu, respectively, EIA said. At this time last year, the natural gas futures contract for October 2012 averaged $2.90/MMBtu, and the corresponding lower and upper limits of the 95% confidence interval were $1.74/MMBtu and $4.82/MMBtu.

While U.S. power generation overall is expected to grow by 0.8% in 2013 and by 1.0% in 2014, generators have been running their existing coal capacity at higher rates so far this year in response to the increasing cost of natural gas relative to coal, EIA said. As a result, the share of total U.S. generation fueled by coal during the first four months of 2013 averaged 39.5% compared with 35.4% during the same period in 2012. The share of generation fueled by natural gas fell from an average of 29.5% during January-April 2012 to 25.8% this year.

Industrial natural gas use during the first five months of 2013 was more than 4%, or 0.9 Bcf/d, greater compared with the same period in 2012, reflecting economic gains and sustained, historically low gas prices that have provided operators of natural-gas-intensive industrial facilities a cost advantage compared with competing facilities that rely on higher-cost energy sources. Projected industrial sector gas use increases by 2.2% in 2013 and 1.3% in 2014, according to EIA.

Marketed natural gas production is projected to increase from 69.2 Bcf/d in 2012 to 70.0 Bcf/d in 2013 and to 70.4 Bcf/d in 2014, which is identical to last month’s STEO. Onshore production increases over the forecast period, while federal Gulf of Mexico production from existing fields declines as the economics of onshore drilling remain more favorable. Gross imports of gas via pipelines, which have fallen over the past five years, are projected to remain near their 2012 level over the forecast. Liquefied natural gas imports are expected to remain at minimal levels of around 0.4 Bcf/d in both 2013 and 2014.