Growing natural gas exports and domestic gas consumption will help push Henry Hub prices to an average $3.13/MMBtu this month and $3.12/MMBtu in 2018, according to the Energy Information Administration (EIA). 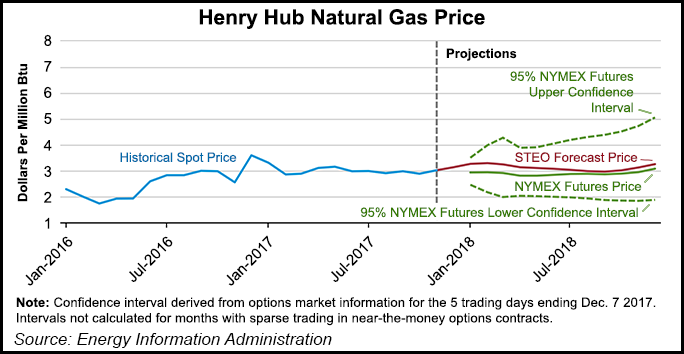 The 2018 price forecast, included in EIA’s latestShort-Term Energy Outlook (STEO), is up 3 cents/MMBtu from last month’s STEO. The forecast remains below EIA’s October prediction of $3.19/MMBtu next year, and the September STEO‘s $3.29/MMBtu forecast.

“Increased takeaway capacity from Appalachia is expected to result in increased natural gas production in the coming months and could limit significant upward price pressure, although colder-than-normal temperatures throughout the rest of 2017 could contribute to price increases.”

Natural gas futures prices in November traded within a 43 cents/MMBtu range, wider than in recent months, but they remained close to $3.00/MMBtu, EIA said.

“In comparison, natural gas futures prices in October traded within a 31 cents/MMBtu range, the narrowest range for October since 1995. Natural gas front-month implied volatility increased 2.3 percentage points since Nov. 1, settling at 39% on Dec. 7.

“After reaching a three-year low in August 2017, volatility has been steadily increasing, as is typical heading into winter, but it remains below the volatility levels seen in November 2015 and 2016.”

Volatility may have been boosted higher in November 2016 by liquefied natural gas exports, which were more than 1 Bcf/d for the first time, thanks in part to Sabine Pass LNG terminal entering service. At the same time, natural gas inventories reached a record high of more than 4 Tcf.

“Natural gas production has shown year-on-year growth since June 2017, and inventories are within 1% of the five-year average level, which may moderate implied volatility,” EIA said.

EIA expects U.S. dry natural gas production to average 73.5 Bcf/d this year, a 0.7 Bcf/d increase compared with 2016, and then expects it to grow another 6.1 Bcf/d in 2018, driven largely by growing production in the Marcellus and Utica shales.