Relatively low natural gas prices and regional environmental initiatives are leading natural gas-fired generators to provide a greater portion of the electricity in the northeastern United States, and the region’s two regional transmission organizations — the Independent System Operator of New England (ISO New England) and the New York Independent System Operator — have seen a dramatic shift away from petroleum- and coal-fired generation since 2001, according to the U.S. Energy Information Administration (EIA). 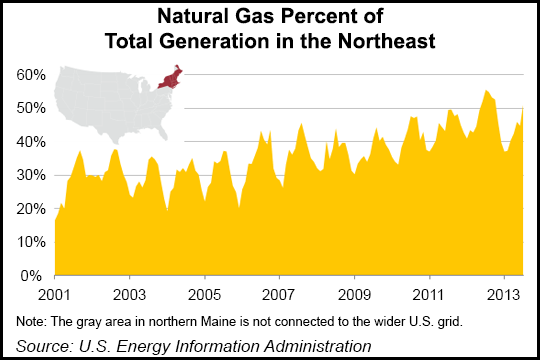 “The increased use of natural gas for electricity generation has raised concerns about fuel diversity, as the Northeast is also reliant on natural gas for part of its heating needs and has limited pipeline capacity to bring gas to market,” EIA said.

In 2012, 52% of electricity generated in the region came from gas-fired plants, 31% from nuclear, 7% from hydro and pumped storage, 7% from renewables, 3% from coal plants and just 1% from oil units. Since 1997, natural gas consumption by New England power producers has grown at a trend-line growth rate of 6% per year. And that trend isn’t likely to reverse anytime soon. “In the coming years, there are plans to retire the two largest coal-fired power plants in the region, as well as one of the region’s nuclear units,” EIA said.

There are no underground natural gas storage facilities in New England — the region’s geology makes underground storage problematic — but New York and Pennsylvania have 77 storage facilities with about 563 Bcf of working gas capacity, according to EIA’s Jose Villar of the Office of Energy Statistics. “New England tends to rely on LNG for its storage and supplemental gas supplies,” he told NGI.

GDF Suez Gas NA’s LNG import terminal in Everett, MA, satisfies about 20% of New England’s annual gas demand. It has been the busiest LNG import facility in the United States for each of the past five years, with nearly 40% of all domestic LNG imports arriving through the port during that period (see Daily GPI, Aug. 14). More than 87 Bcf of LNG from Yemen has been delivered to Everett since 2010, according to EIA. The Everett terminal has two LNG storage tanks with a combined capacity of 3.4 Bcf, or 42 million gallons, and installed vaporization capacity of about 1 Bcf/d. Distrigas delivers vaporized LNG via the interconnecting facilities to two interstate natural gas pipelines Algonquin Gas Transmission LLC and Tennessee Gas Pipeline Co., and KeySpan Energy Delivery New England.

Reliability and peak demand in New England could be compromised without a more robust natural gas market and infrastructure build out in the region, according to officials from the gas and power sectors, including Kevin Kirby, vice president for market operations at ISO New England (see Daily GPI,Oct. 24). And Peter Brandien, vice president of system operations for ISO-New England, has said that while New England is taking a fuel-neutral approach, it needs to have additional gas infrastructure (see Daily GPI, Oct. 17).

A quarterly update of various regional efforts to coordinate natural gas and electric markets released recently by the Federal Energy Regulatory Commission showed that the New England and Northeast generation markets will continue to be the most gas-dependent during the upcoming heating season (see Daily GPI, Sept. 20).

Energy efficiency programs will help to keep electric demand in the region nearly flat over the next decade, according to ISO New England’s 2013 Regional System Plan(see Daily GPI, Nov. 11).