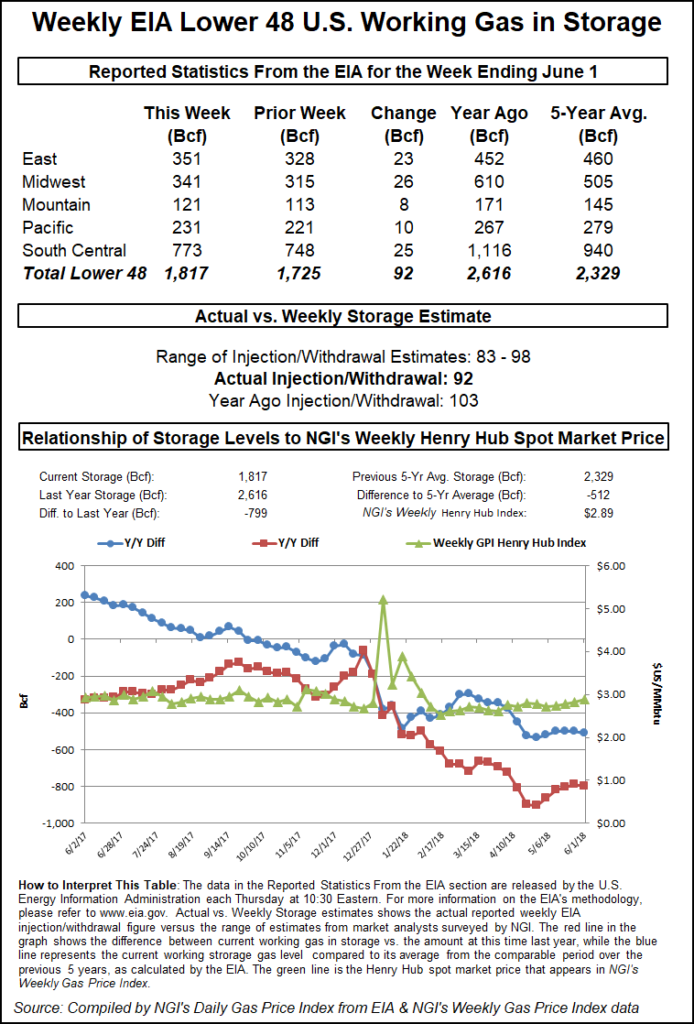 The net build compared with a 103 Bcf injection for the same week last year and the five-year average build of 104 Bcf. There were 71 cooling degree days (CDD) last week compared with 44 CDDs at the same time last year and a 30-year normal of 42 CDDs. In the week ended May 25, 96 Bcf was added to storage.

Before the data’s release, market estimates were wide ranging, between 77 Bcf and 98 Bcf, and far short of the triple-digit injection some would expect from a holiday weekend.

INTL FCStone Financial Inc. Senior Vice President Tom Saal told NGI that the story is the Memorial Day weekend. “If we got over 100 Bcf, I wouldn’t be surprised. That weekend should produce a big number.” His official estimate, however, is for a 97 Bcf injection.

ION Energy’s Kyle Cooper projected a 97 Bcf injection, while a preliminary Bloomberg survey had a median estimate of an 89 Bcf build. A Reuters poll pointed to a 90 Bcf injection, and the Intercontinental Exchange EIA Financial Weekly Index settled Wednesday at an injection of 94 Bcf.

“This print is significantly looser from last week, indicating a slightly smaller injection despite very significant heat. However, Memorial Day holiday demand destruction likely played a large role, keeping us from reading too much into this,” Bespoke Weather Services said.

The forecaster was right on target with its 92 Bcf storage injection estimate. Bespoke’s Jacob Meisel said Thursday’s EIA print does indicate that the market is not tightening, something its daily power burn tracking has shown.

“This print should limit resistance from $2.97-$3.00” even after the reported TransCanada Corp. Columbia Gas Transmission pipeline explosion in West Virginia earlier on Thursday got prices off support.

Meisel added that the EIA print seems to confirm a range-bound market, with risk slightly lower on any further loosening/gas-weighted degree day losses.