The growth rate for natural gas storage capacity slowed during the first six months of 2014, with all of the growth coming from expansions at existing facilities and most occurring at salt domes in the producing region, according to the U.S. Energy Information Administration (EIA). 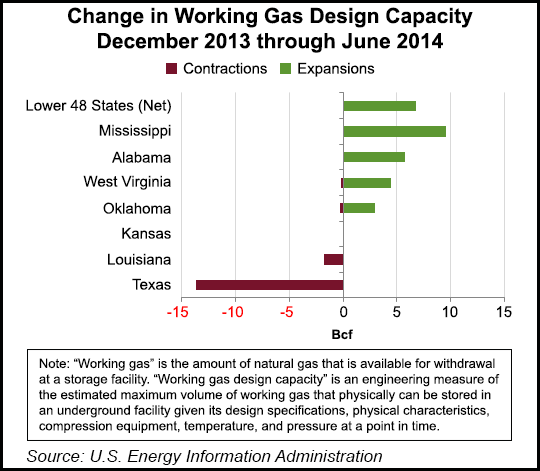 On Friday, the EIA reported that net working natural gas design storage capacity in the Lower 48 states grew by about 6.73 Bcf during 1H2014, to about 4.69 Tcf. In the producing region, which comprises Alabama, Arkansas, Kansas, Louisiana, Mississippi, New Mexico, Oklahoma and Texas, an additional 2.46 Bcf of net capacity came online during the same time frame, and totaled about 1.57 Tcf at the end of June.

By comparison, nearly 25 Bcf of net capacity additions came online during the first six months of 2013 in the Lower 48, and another 1.3 Bcf came online in the producing region.

“The subdued growth comes at a time when volumes of stored natural gas are running 15% below their year-ago and five-year-average volumes,” the EIA said. “At the same time, however, natural gas production is well ahead of the year-ago pace, with…gross withdrawals from wells in June up 6.8% year-over-year.”

The EIA said expansions at salt facilities in Mississippi and Alabama totaling 15 Bcf accounted for two-thirds of the capacity additions during 1H2014.

According to the agency, the largest expansion (8.3 Bcf) occurred when Sempra U.S. Gas & Power LLC brought a third storage cavern at its Mississippi Hub salt dome in Simpson County, MS, online in May. The second-largest (5.8 Bcf) occurred in June, after Sempra completed a fifth cavern at its McIntosh salt dome in southwest Alabama, which is part of the Bay Gas Storage facility.

“There are several planned storage projects scheduled to come online over the next couple of years that could add 54 Bcf of working gas capacity,” the EIA said. “Four of these are new facilities that are currently under construction.

“A new depleted reservoir facility, located in Colorado, with a planned completion date late in 2014, will increase working gas capacity by 7 Bcf. Additionally, three new salt dome facilities, which are scheduled to enter service in 2015 and 2016 in Louisiana and Texas, could provide an additional 29 Bcf of working gas capacity.”