Natural gas production from seven key U.S. shale plays is set to fall by a combined 560 MMcf/d from February to March as output from most major producing regions is expected to slow over the next month, according to the U.S. Energy Information Administration (EIA). 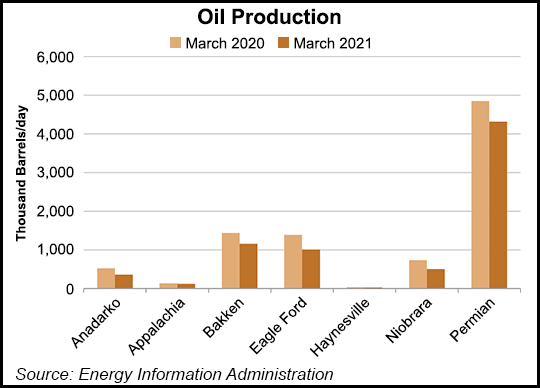 Combined natural gas output from the Anadarko, Appalachian and Permian basins, as well as from the Bakken, Eagle Ford, Haynesville and Niobrara shales, is set to fall from 82.586 Bcf/d in February to 82.026 Bcf/d in March, according to EIA’s latest Drilling Productivity Report (DPR), published Tuesday.

EIA’s latest tally of drilled but uncompleted wells (DUC) showed inventories dropping a combined 159 across the seven regions from December to January. The Permian depleted its backlog to 3,468, down 38 month/month, while the Niobrara backlog fell 36 units to 467.

The Anadarko (down 20), Appalachia (down 9), Bakken (down 24), Eagle Ford (down 27) and Haynesville (down 5) also saw DUC inventories fall from December to January, EIA data show.

Across the seven regions, new-well natural gas production per rig is set to fall by an average 94 Mcf/d from February to March to 6,876 Mcf/d. That includes a projected 244 Mcf/d decline in per-rig productivity in the Niobrara. On the other hand, per-rig productivity in Appalachia is set to climb 272 Mcf/d month/month, according to the February DPR.

EIA expects new-well oil production per rig to drop 25 b/d to 1,023 b/d from February to March. Productivity in the Niobrara is expected to drop 77 b/d per rig month/month, with Permian rig productivity on track to drop 34 b/d month/month.