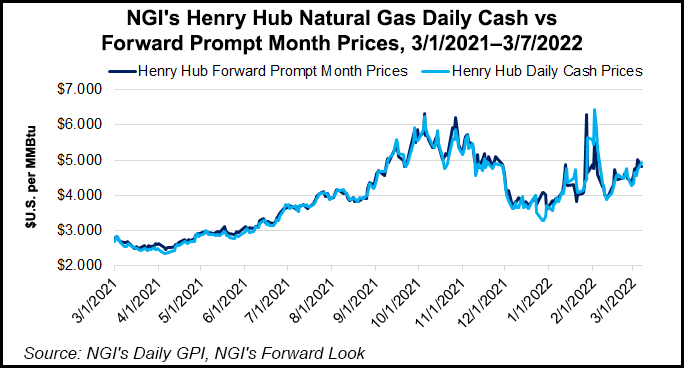 However, prognostication in the energy space is fraught with pitfalls in the best of times. Recent events have clearly made the task even more difficult, a fact EIA researchers acknowledged in a special statement released alongside this month’s STEO.

The Covid-19 pandemic had already created “greater-than-usual uncertainty” in EIA’s forecasting, and “this uncertainty has increased significantly following Russia’s further invasion of Ukraine,” according to the agency.

Among the key developments that could impact oil markets moving forward, researchers said nations besides the United States could ban imports of Russian energy or announce further sanctions. Independent actions by corporations could also impact Russia’s oil production, they said.

Meanwhile, producers not working in Russia could increase output in response to higher prices, according to the agency.

“In recent months, we have consistently forecast that global production of energy commodities such as crude oil will increase this year to balance demand that has increased more rapidly since mid-2020,” EIA researchers said. “We still forecast this.

“We expect global oil production in 2022 will increase to the point of beginning to restore depleted global inventories, which could contribute to some declines in crude oil prices. However, the Russian action in Ukraine and the global response to it make these forecasts highly uncertain.”

The crude prices modeled in the latest STEO are predicated on a projected 0.5 million b/d average increase in global oil inventories between 2Q2022 and the end of 2023. That rate reflects reduced oil production from Russia.

“However, if production disruptions — in Russia or elsewhere — are more than we forecast, resulting crude oil prices would be higher than our forecast,” researchers said.

Brent spot prices averaged $97 in February, an $11 sequential increase, EIA said. That was before the events in Ukraine sent prices spiking to nearly $124 in the first week of March, roiling a global market that was already experiencing “persistent upward oil price pressures” amid low inventories.

“Oil consumption will depend on how economic activity and travel respond to recent and any potential future events and sanctions,” they said.

Meanwhile, EIA said it expects Henry Hub spot prices to average $3.95 for full-year 2022 before declining to $3.59 in 2023. Henry Hub averaged $4.69 in February, up from $4.38 in January, as inventory draws outpaced the prior five-year average for the month.

After freeze-offs impacted supply in February, the agency said it expects production to rise sequentially in March and put downward pressure on natural gas prices.

U.S. dry natural gas production averaged an estimated 95.3 Bcf/d in February, off 0.6 Bcf/d from January output. Production is expected to climb to 95.7 Bcf/d in March and reach 96.7 Bcf/d for full-year 2022. Production is on track to climb further to 99.1 Bcf/d on average in 2023, researchers said.

Domestic consumption is set to average 84.6 Bcf/d this year, up 2% from 2021 levels, reflecting higher industrial demand amid increased manufacturing activity, as well as colder temperatures year/year driving an uptick in residential/commercial demand. Higher renewable energy generation should reduce demand for natural gas in the electric sector this year, according to the STEO.

“Similar to last year, U.S. LNG exports in February were limited by fog in the Gulf of Mexico that affected vessel traffic and led to piloting services being suspended for several days on the Sabine Pass, Lake Charles and Corpus Christi waterways,” researchers said.