The Energy Information Administration (EIA) joined a growing list of analysts raising 2013 natural gas price forecasts, saying in a Short-Term Energy Outlook (STEO) released Tuesday that it expects spot prices, which averaged $2.75/MMBtu at the Henry Hub last year, to climb to an average of $3.52 this year and $3.60 in 2014. 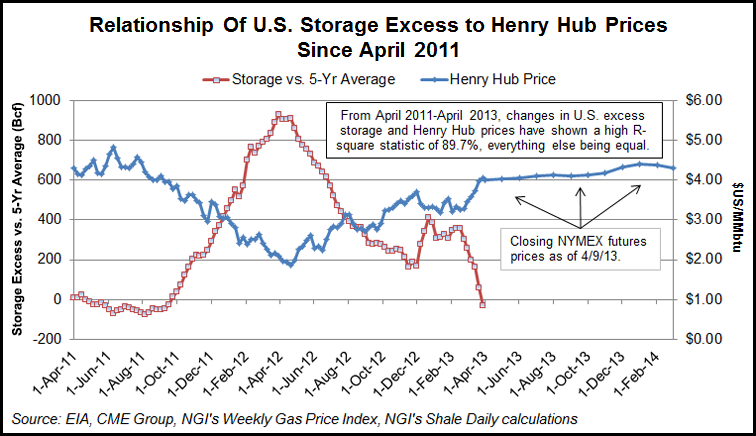 The 2013 price forecast is an 11 cents/MMBtu increase and the 2014 number a 3 cents/MMBtu decrease compared with EIA’s previous forecast (see Shale Daily, March 13).

Natural gas spot prices averaged $3.81/MMBtu at the Henry Hub in March, up nearly 48 cents from the $3.33/MMBtu average seen the previous three months. March was about 17% colder than forecast in last month’s STEO, which contributed to an increase in natural gas consumption and larger-than-expected storage withdrawals, EIA said.

“Unusually cold temperatures in March led to larger-than-expected withdrawals of natural gas from storage,” said EIA Administrator Adam Sieminski. “The 94 Bcf of gas pulled out of storage for the week ending March 29 was the largest net withdrawal for this time of year since EIA began its weekly storage data collection in 2002.”

In the most recent STEO, EIA projects that natural gas marketed production will increase to 69.3 Bcf/d this year and 69.4 Bcf/d in 2014 from 69.1 Bcf/d last year. “Onshore production increases slightly over the forecast period, while federal Gulf of Mexico production declines,” the agency said.

Natural gas pipeline gross imports, which have declined over the past five years, are projected to remain near their 2012 level over the forecast period, and liquefied natural gas imports are expected to remain below 0.5 Bcf/d through 2014.