Two projects scheduled to begin initial service by the end of September could increase natural gas takeaway capacity in the Marcellus Shale by a combined 0.5 Bcf/d, according to the U.S. Energy Information Administration (EIA). 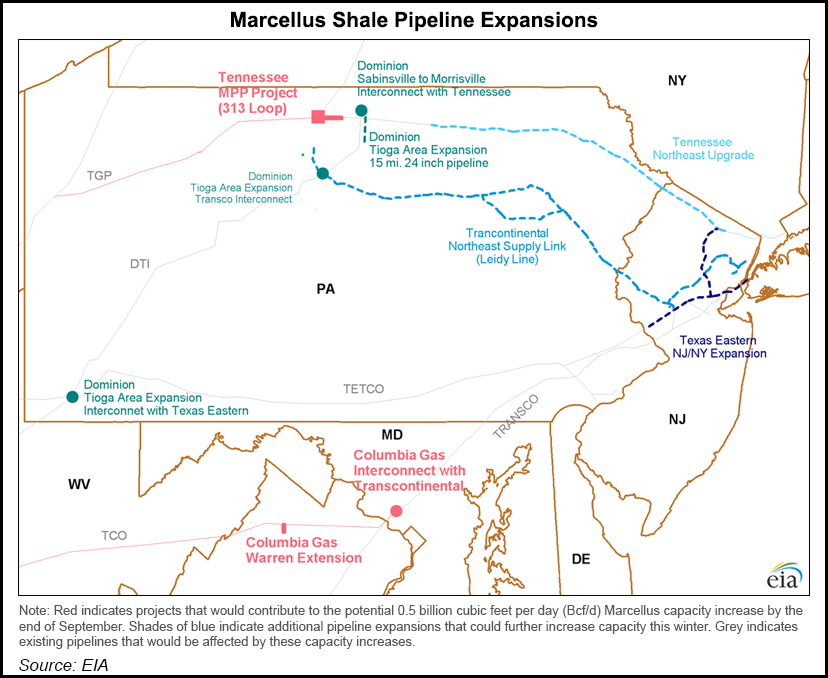 The agency added that another five projects could collectively add another 1.99 Bcf/d of takeaway capacity from the Marcellus during the upcoming winter months.

Last week, TGP asked FERC for authorization to put a pipe expansion in northern Pennsylvania into service by Monday, and for compression station modifications to be placed into service by Nov. 1 (see Shale Daily,Sept. 17). The pipeline — also known as Loop 313, part of TGP’s MPP project — is a 7.9-mile, 30-inch diameter looping segment with 0.23 Bcf/d capacity.

According to the EIA, TCO’s project also includes upgrades to compressor stations along its main line, which carries gas east from the Marcellus Shale in West Virginia. TCO, a NiSource Inc. subsidiary, also plans to replace its interconnect with Williams’ Transcontinental Gas Pipe Line (Transco) near Rockville, MD.

The EIA cited five projects that collectively would increase takeaway capacity even further when they come online this winter:

The EIA will release its next Natural Gas Weekly Update on Thursday.