Natural gas bulls have taken it on the chin so far this heating season, but Henry Hub spot prices remain on track to average $4.58/MMBtu from December through February, according to the latest forecasting from the U.S. Energy Information Administration (EIA). 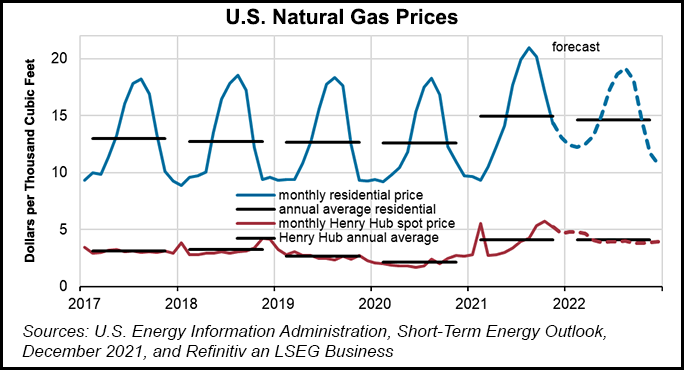 The winter price prediction, published Tuesday as part of the December edition of the EIA’s Short-Term Energy Outlook, reflects a nearly $1 discount versus the prior month’s forecast, when the agency called for an average price of $5.51 for November through February.

The forecast should come as welcome news for natural gas buyers in Mexico, who have expressed consternation about a supply and/or price shock similar to Winter Storm Uri occurring again this winter.

Mexico relies on imports to meet over 90% of domestic demand, excluding gas consumed by state oil company Petróleos Mexicanos. As a result, gas transactions in Mexico are typically linked to U.S. locations such as Waha, Houston Ship Channel and Henry Hub.

Henry Hub prices averaged $5.05 in November, down sequentially from the $5.51 October average. Mild weather lowered heating demand and allowed stockpiles to narrow the deficit versus the five-year average during the month, even as strong global demand supported prices, the agency noted.

EIA in the latest STEO cautioned that the emergence of the Omicron coronavirus variant “raises uncertainty about the level of energy consumption throughout the world” versus the prior month’s expectations.