The use of natural gas for power generation in the Lower 48 is expected to increase to 1.6 billion megawatt hours (MWh) by 2040, a 1.3% average annual increase, in part due to development of several shale plays, according to the U.S. Energy Information Administration (EIA). 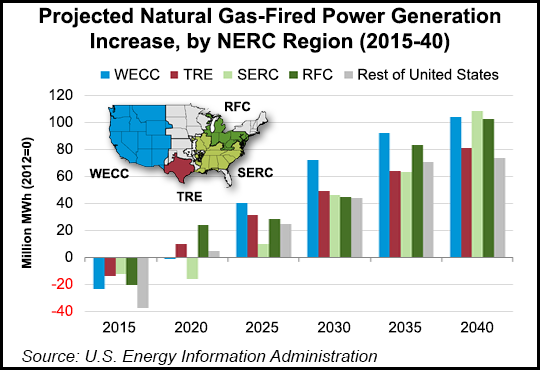 In a “Today in Energy” brief released Friday, EIA said increasing natural gas supplies would fuel unexpected growth in the gas-fired power generation sector, especially after 2020. The agency also forecast a 56% increase in gas production from 2012 to 2040, largely due to the development of shale gas, tight gas and offshore gas areas.

Coal is projected to remain the top fuel for power generation in the SERC and RFC regions through 2040. In the near term, gas-fired generation is projected to decline in those two regions through 2014 in response to higher gas prices, but it is expected to rebound in both regions in 2015 and 2016 as some coal-fired generation is retired. Cumulative coal retirements are estimated at 20 gigawatts (GW) in the RFC region and 12 GW in the SERC region.

In the WECC region, renewables — including hydroelectric and non-hydro sources — is expected to remain the main source for power generation through 2040. Gas-fired and renewable generation are both projected to increase by an annual average of 1.5%, while coal-fired generation decreases.

“A number of fast-growing natural gas basins are in or near this region,” EIA said, citing the Niobrara and Bakken shales, and the Permian and Williston basins. The agency added that gas-fired generation in the WECC region “grows alongside renewable generation as requirements in renewable portfolio standards also necessitate additional generation to complement renewables for load-balancing purposes, particularly in California, for which natural gas is the most commonly used fuel.”

Over the near term, EIA said higher natural gas prices are expected to curtail gas-fired generation in the WECC region through 2016. Demand for gas-fired power is expected to be largely unaffected by coal plant retirements, which are rare for the region. But in the medium- to long-term, gas-fired generation will rise significantly beginning in 2018 and will replace coal as the second-largest fuel source for power in 2021.

In the TRE — which includes much of the Permian Basin and the Eagle Ford Shale, as well as a part of the Haynesville Shale — natural gas is expected to become the region’s sole source for power generation growth from 2016 to 2040.

“Coal-fired, renewable, and nuclear generation are all virtually flat through 2040, with increased gas-fired generation satisfying almost all of the region’s 0.9% per year electric power demand growth,” EIA said, adding that gas-fired generation is expected to fall through 2015 on higher gas prices, but over the medium- to long-term will rebound beginning in 2016.