It’s not how many rigs there are in the shale patch; it’s what they’re doing. As drilling productivity continues to climb, the industry has realized a simple rig count is a poor indicator of future production. Now the Energy Information Administration (EIA) is monitoring and reporting on drilling productivity. 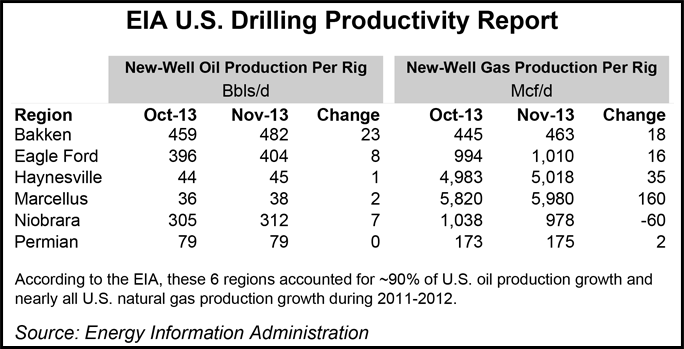 The first report has found that increases in drilling efficiency and new well productivity, rather than an increase in the number of active rigs, have been the main drivers of recent growth in domestic oil and gas production.

The Bakken and Eagle Ford regions combined account for about 75% of current monthly oil production growth across the six regions tracked in the DPR. Over the past year, production in these two regions increased by nearly 700,000 b/d. The Permian region, which remains the biggest absolute oil producer, grew by about 93,000 b/d from last year’s production level.

“The DPR synthesizes several different types of information to shed light on the current rate of growth or decline in production based on indicators including the active rig count, drilling efficiency and the productivity of new wells, and production and depletion trends for previously producing wells,” EIA said. “The DPR metrics are intended to be more informative than traditional indicators such as simple counts of oil-directed and gas-directed drilling rigs in use.”

The DPR makes use of recent rig activity data but also considers recent information on wells drilled per active rig (rig productivity), average oil and natural gas production rates from new wells during their first full month of operation, and estimated changes in production from existing wells to develop estimates of overall changes in production for each region.

Because production data reported by states can be delayed, DPR uses the rig count data along with trends in drilling productivity to make estimates of oil and gas production where data are not yet available.

With more than half of newly-drilled wells now producing both oil and natural gas, it is also no longer sufficient to categorize rigs as either oil-directed or gas-directed, EIA said. The DPR does not distinguish between oil-directed and gas-directed rigs — it counts all active rigs — because once a well is completed, it may produce both oil and gas.

EIA is not the first to notice that the old-fashioned rig count doesn’t quite cut it in the shale era. Four years ago, Bentek Energy LLC noted per-rig efficiency gains that had been achieved by the industry when it launched its Bentek Productivity Index (see Daily GPI, Oct. 29, 2009).

More recently, Raymond James & Associates Inc. said it will include well count and footage count forecasts in its analyses of capital spending plans by producers. “In the past, we used our rig count forecast to reflect spending behavior,” the firm said. “The market isn’t that simple anymore” (see Shale Daily, Sept. 25).

And Baker Hughes Inc., famous for its rig count, has added a well count to the slate of data it provides to the industry. The idea is that when combined with its Rig Count, drilling efficiencies can be tracked by basin (see Shale Daily, Oct. 15).

The new data gathered by EIA will also be used in its short-term production outlooks “Given the importance of drilling productivity trends as a driver for future domestic production, EIA has been developing new approaches to assess the productivity of drilling operations,” the agency said.