It is clear that the widespread producer cutbacks that began last fall to combat falling prices have not yet translated into reduced natural gas supplies as production in the Lower 48 states was 63.01 Bcf/d in January, down 0.29 Bcf/d, or half of a percent from December, but up 2.7 Bcf/d, or 4.5% compared with January 2008, according to Energy Information Administration (EIA) estimates released Thursday.

Federal offshore Gulf of Mexico (GOM) production, hit hard by hurricanes Ike and Gustav last September, was 6.36 Bcf/d in January, up 9.3% since December but still down 1.54 Bcf/d (19.5%) from January 2007. In September offshore GOM production tumbled to just 2.22 Bcf/d, EIA said.

Producers — faced with steeply lower natural gas prices — began laying down rigs and reducing capital budgets last fall. Chesapeake Energy Corp. CEO Aubrey McClendon said last November that falling prices and the economic recession would lead to the reduction of 300-500 active rigs during 2009 (see Daily GPI, Nov. 3, 2008). The fact that production levels are actually up versus January 2008 levels does not come as much of a shock as it is expected to take some time to see the trickle-down results of the reduced activity.

Barclays analysts said earlier this week that with current rig counts, sequential declines in production, if not already under way, should occur in the “very near future.” Assuming the rig count finishes 2009 at 700, which would require another 150 or so rigs to fall, “domestic production could be down as much as 3.8 Bcf/d year/year by December 2009…,” they said (see Daily GPI, April 2).

On Tuesday the EIA raised its projection for domestic natural gas production and demand in the coming decades, citing the continued rapid growth in gas shale development and demand for gas by power generators (see Daily GPI, April 1). The Department of Energy predicts that domestic gas production will increase 22% by 4.3 Tcf/year between 2007 and 2030, while net imports will fall by 3.1 Tcf/year (22%). The EIA sees natural gas demand rising by 0.2% annually during the projection period. 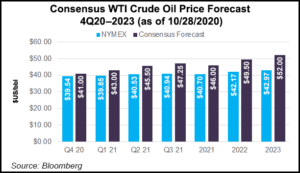 Midstream giant Enterprise Products Partners LP executives said Thursday demand for petrochemical products has stayed resilient through the coronavirus pandemic, and said oil prices could see a boost as early as next year. “The global economy is in the early stages of reopening from a self-imposed sudden stop due to Covid-19,” said Enterprise’s Jim Teague,…