Updated structure and thickness maps for one of the busiest developments in the Permian Basin, the Wolfcamp within the Midland sub-basin, have been updated by the Energy Information Administration (EIA). 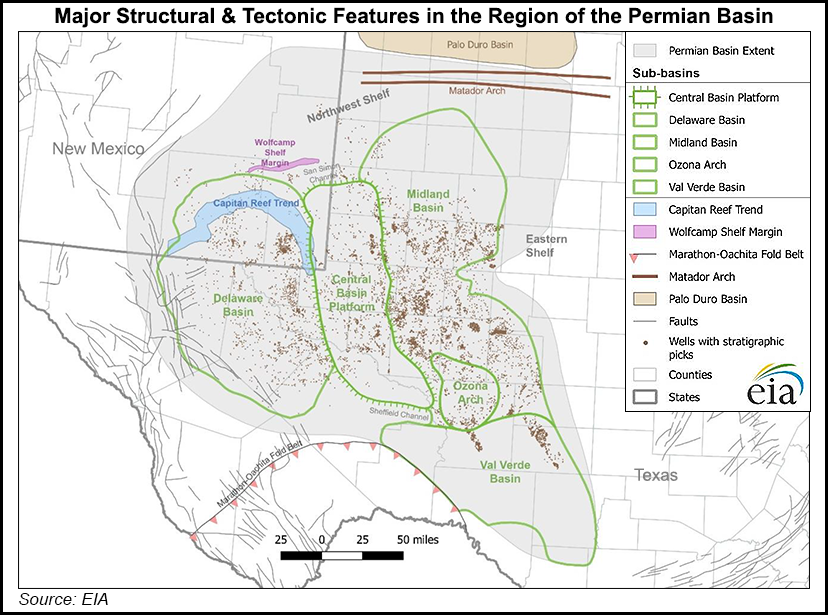 The Wolfcamp formation, which straddles the Midland and Delaware formations, “has attracted many oil companies because of its stacked potential,” i.e. multiple hydrocarbon-producing zones that are on top of one another, researchers noted.

Four intervals, or benches, are within the Wolfcamp, designated from top to bottom as A, B, C and D.

Most of the current drilling activities in the Midland target the upper Wolfcamp A and B benches.

“In 2019, A and B benches generated 95% of total Wolfcamp hydrocarbon production in the Midland Basin,” the researcher said.

The structure and thickness maps provide key ways to estimate oil and natural gas resources, as well as to define “the areas where hydrocarbon extraction is economical.”

Of the producing formations that comprise the Midland, the Wolfcamp “is the deepest and thickest,” but it varies across the basin.

The EIA’s illustrations provide an estimation of subsurface formation volumes to help detect regional structural and tectonic features such as major faults, folds and thrusts.

The Wolfcamp’s sandstone layers have produced oil and natural gas from vertical wells throughout the Midland since the late 1940s. When unconventional drilling came into vogue about a decade ago, combining hydraulic fracturing with horizontal drilling, “techniques opened up the low permeability shale zones of the Wolfcamp formation to hydrocarbon production.”

The expanded productive intervals, which make up the Wolfcamp, have led to more than 8,800 horizontal well completions in the Midland from 2010 through July.