The Energy Information Administration expects renewable energy sources to generate almost a quarter of the nation’s electricity by next year, but some markets will still hold fast to natural gas as their primary energy source. 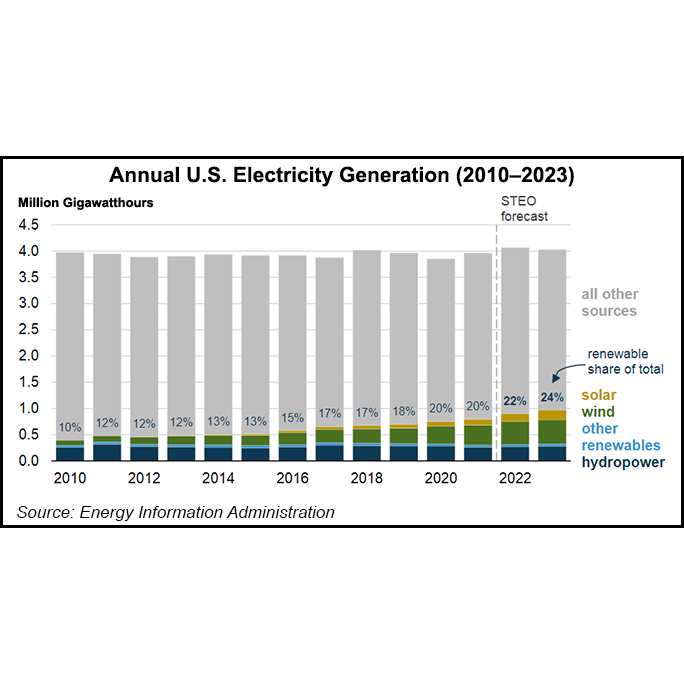 In the latest Short-Term Energy Outlook, EIA forecasted renewable sources will generate around 22% of the nation’s electricity this year before growing to 24% in 2023. Much of that growth was attributed to a glut of wind and solar generation capacity coming online this year to fill the space left by retiring coal-fired and nuclear facilities.

“The largest renewable projects that came online in the first six months of 2022 include the 999 MW Traverse Wind Project in Oklahoma, the 492 MW Maverick Creek Wind in Texas and the 440 MW solar and battery storage project at Slate Hybrid in California,” EIA analysts wrote.

Wind and solar projects, particularly in Texas and parts of the Southwest, have been rapidly changing the balance of regional power markets over the last decade, the EIA wrote. By next year, analysts forecast the Electric Reliability Council of Texas (ERCOT) will be the only electricity market region to go from having less renewable energy than the rest of the nation to beating out the average in a decade.

ERCOT has increased its share of electricity generated by renewables from 10% in 2013 to 32% in 2022, largely driven by wind farm projects. ERCOT is only surpassed by the Southwest Power Pool region, which increased from 13% to an estimated 44% this year.

EIA credited increased renewable output from both regions for boosting wind power to the second-highest source of electricity generation in the United States for the day on March 29. It was the first time wind power had both surpassed coal and nuclear power, but it still lagged behind natural gas by 12%.

The growth in renewables hasn’t been equal amongst the nation’s power regions however, EIA reported. Three East Coast regions, the PJM Interconnection in the Mid-Atlantic, the Southeast (SERC Reliability Corporation) and the Florida Reliability Coordinating Council are all expected to stay below the national average for electricity generated by renewables into next year.

“Natural gas and nuclear sources provide most of the electricity generation in the Southeast and Florida,” analysts wrote. “In PJM, the prevalent generation sources have been natural gas and coal.”

Additionally, EIA has reported national natural gas consumption is forecast to increase this year to an average of 85.2 Bcf/d. It would be a 3% jump year/year. Consumption could drop again by 2% in the following year, analysts wrote, but the electric power sector continued to favor natural gas over coal for power generation “despite elevated natural gas prices.”