U.S. dry natural gas production should average 96.9 Bcf/d in April and 97.4 Bcf/d for full-year 2022, which would reflect a 3.8 Bcf/d increase over 2021 levels, according to updated forecasting from the Energy Information Administration (EIA). 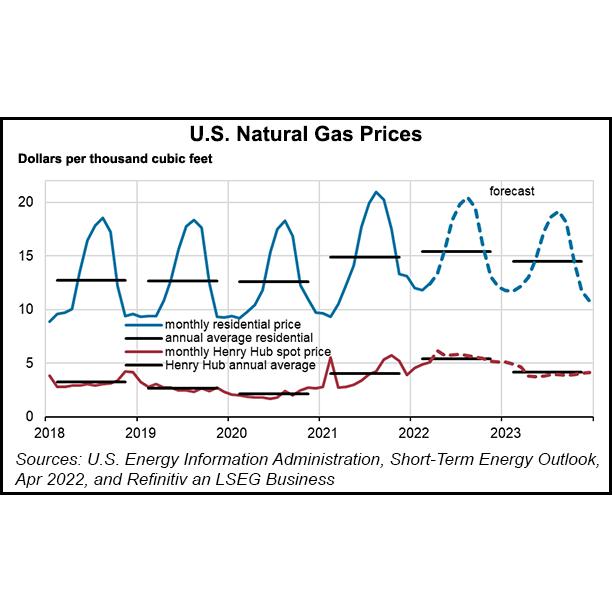 As the market has keyed in on supply adequacy fears and sent prices soaring well above $6.500/MMBtu this month, domestic production trends have taken on increased significance in setting the tone for prices.

In its latest Short-Term Energy Outlook (STEO), EIA estimated domestic output of 96.2 Bcf/d in March, up 1.2 Bcf/d from February levels.

“Similar to January and February, production in March was lower than in December because of brief periods of freezing temperatures in certain production regions and, in part, because of maintenance, according to public sources,” researchers said.

Perhaps unsurprisingly in the context of recent price trends, the latest STEO Henry Hub forecast reflects a marked increase from the 2Q2022 average of $3.83 the agency modeled a month earlier.

Mexico gas prices are closely tied to those in the United States, given Mexico’s dependence on U.S. gas supplies. Imports accounted for 88% of Mexico’s gas market as of November 2021, according to regulator Comisión Nacional de Hidrocarburos (CNH).

State-owned power company Comisión Federal de Electricidad (CFE) has sought continued collaboration with the private sector to expand Mexico’s pipeline and LNG infrastructure, even amid tensions between the government and the private energy sector.

Mexico’s own gas production inched upward to 3.94 Bcf/d in February from 3.8 Bcf/d in the same month last year.

“LNG prices in Europe remain high amid supply uncertainties due to Russia’s further invasion of Ukraine and the need to replenish Europe’s natural gas inventories, which has kept Europe’s demand for LNG elevated,” researchers said. “Inventories in Europe were 26% full as of March 31, compared with the five-year average of 34%.”

U.S. LNG exports are expected to remain at “high levels” through the year, with an anticipated 2022 average of 12.2 Bcf/d, a 25% year/year increase, according to the latest STEO.

U.S. natural gas consumption, meanwhile, is set to average 84.1 Bcf/d for 2022, a 1% increase over 2021 levels. Researchers attributed the higher forecast demand in 2022 to increased residential/commercial demand and higher industrial consumption “in response to expanding economic activity.”

“A wide range of potential macroeconomic outcomes could significantly affect energy markets during the forecast period,” researchers said. “Energy supply uncertainty results from the conflict in Ukraine, the production decisions of OPEC-plus, and the rate at which U.S. oil and natural gas producers increase drilling.”