The Energy Information Administration (EIA) reported Thursday morning that while end-of-refill-season working natural gas storage levels are expected to be ample, inventories could enter November at the lowest level in three years. 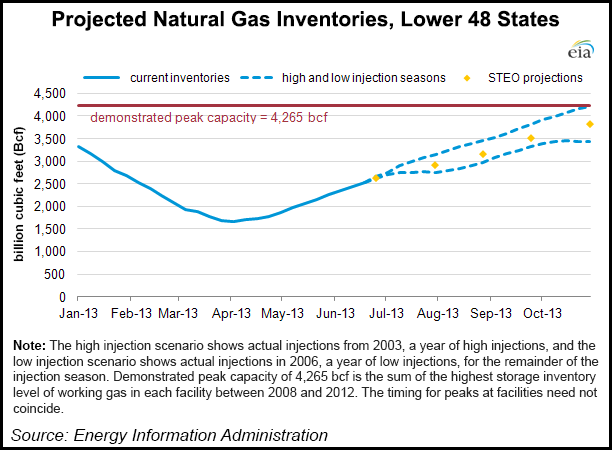 According to government projections, working gas in storage is expected to total about 3,800 Bcf on Oct. 31, which marks the traditional end of the summer injection season. However, over the past number of years, injections have continued sometimes well into November, depending on weather and storage levels at the time.

Utilizing its own estimate of the demonstrated peak capacity, and representative profiles of seasons that had relatively higher (2003) and lower (2006) injections, EIA said Monday it expects summer 2013 natural gas injections to outpace, but not top, last year because aggregate storage at the April 1, 2013 start of the injection season was 31% lower than in 2012, when storage was unusually high after an extremely mild winter.

“To meet their target storage inventory levels for the start of the 2013/14 winter, many local distribution companies will need to increase the amount of natural gas they have in underground storage fields this summer compared to last summer,” EIA said Monday. “Moreover, so far this injection season, higher natural gas production and lower gas use for power generation have contributed to more injections compared to 2012.”

The trend of larger injections almost didn’t hold up Thursday. After a number of weeks where the EIA-reported injection figure far outpaced historical comparisons, Thursday morning’s report of a 57 Bcf injection for the week ending Aug. 16 cut it a bit close (see related story). The number came in well below industry expectations and was 1 Bcf higher than the 56 Bcf five-year average for the week and 14 Bcf more than the date-adjusted 43 Bcf refill a year ago.

Inventories now stand at 3,063 Bcf and are 238 Bcf less than last year at this time and 44 Bcf above the five-year average.

EIA data revealed that use of natural gas for power generation was about 20% less than last year during the second quarter of 2013 (April, May and June), and the Short-Term Energy Outlook projects third-quarter consumption will average about 12% less than in the same quarter of 2012.

Total injections this summer will be similar to those in 2008-2011 but much higher than in 2012. Two key factors affected injections during summer 2012: starting inventories and gas use for power, according to EIA. The government agency said injections were historically low last summer because the warmest winter in 60 years left end-of-season inventories at record highs. Moreover, the lowest spring natural gas prices in 10 years boosted natural gas use for electricity generation, as generators substituted natural gas for coal by changing the dispatch order of their generation plants.

Storage levels had a lot of room to make up this injection season after a colder-than-normal March this year contributed to a late winter drawdown of natural gas stocks in both the East and Producing regions, but Lower 48 inventories were still 10% above the 2007-11 average. End-of-March 2013 stocks by storage region were: East Region (661 Bcf); West Region (344 Bcf); and the Producing Region (705 Bcf).

Giving an idea of how far injections have been going into the month of November the last few years, inventories topped out at:

“Forecast consumption of natural gas for power generation in 2013 is below year-ago levels, but it is still above the 2007-2011 average, which limits the degree to which this year’s projected injections will exceed historical levels,” EIA said.