A spate of natural gas pipeline projects that are nearly through the regulatory process and close to starting construction could dramatically increase the Utica Shale’s takeaway capacity over the next two years, the Energy Information Administration (EIA) said. 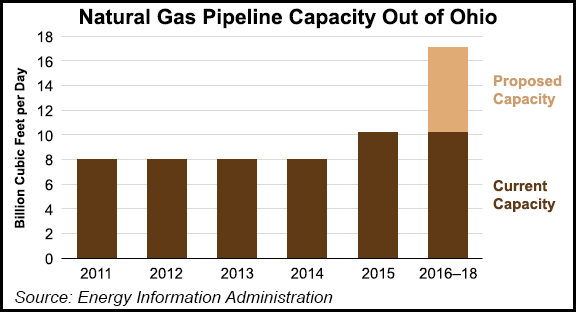 Commercial production from the Ohio portion of the Utica was first reported in 2011 and development of the play has accelerated. Currently, about 10 Bcf/d of takeaway serves the Utica’s Ohio market, but four pipeline projects nearing the regulatory finish line could ultimately boost capacity to nearly 17 Bcf/d by 2018.

Utica production has grown rapidly, with dry gas output increasing to 74.1 Bcf/d last year, or by 4.5% from 2014 levels. Production in Ohio increased the most by percentage, up more than 99% from 1.31 Bcf/d in 2014 to 2.62 Bcf/d in 2015, and it has continued posting gains this year, according to EIA data. However, pipeline infrastructure has failed to keep pace, pushing local prices lower. In 2011, there was only 8 Bcf/d of takeaway capacity available.

Producers have taken note. Appalachian pure-play Ascent Resources LLC recently completed an equity raise that netted it $787 million. Ascent is the largest firm capacity holder on Rover with 1.1 Bcf/d and it needed the cash to accelerate drilling to fulfill that commitment in November 2017 when part of Rover is expected to come online.

After Rice Energy Inc. agreed to acquire Vantage Energy for $2.7 billion in September, management said the company wouldn’t alter its firm transportation portfolio given capacity coming online in Appalachia that it expects will lift prices.