There may be light at the end of the tunnel for slumping natural gas prices, according to the Energy Information Administration (EIA), which said Monday it expects the benchmark Henry Hub to average $2.65/MMBtu in 2016 and $3.22/MMBtu in 2017. 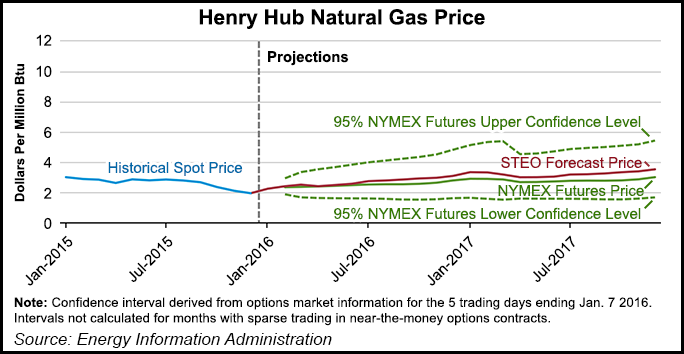 The increases, compared with $2.63/MMBtu in 2015, will come thanks to consumption growth, mainly from the industrial sector, that are expected to outpace near-term production growth, EIA said in its latest Short-Term Energy Outlook (STEO).

Henry Hub prices averaged $1.93/MMBtu last month, a decrease of 16 cents from November, according to the STEO report.

“Warmer-than-normal temperatures in the first half of the heating season, record inventory levels, production growth, and forecasts for a warm winter contributed to spot prices remaining low,” EIA said.

Current options and futures prices imply that market participants place the lower and upper bounds for the 95% confidence interval for April 2016 contracts at $1.61/MMBtu and $3.52/MMBtu, respectively. At this time last year, the natural gas futures contract for April 2015 averaged $2.88/MMBtu and the corresponding lower and upper limits of the 95% confidence interval were $1.90/MMBtu and $4.36/MMBtu, EIA said.

EIA expects production growth to be relatively flat this year, partly in response to low prices and declining rig activity. Total marketed natural gas production hit a record high of 80.2 Bcf/d in September, and EIA estimates marketed production last year averaged 79.1 Bcf/d (up 5.7% from 2014). Growth will slow to 0.7% in 2016, the agency said.

EIA expects natural gas exports to Mexico to increase because of growing demand from Mexico’s electric power sector, coupled with flat gas production there. LNG gross exports are forecast to increase to an average of 0.7 Bcf/d in 2016 and 1.4 Bcf/d in 2017.