New wells in the nation’s shale plays helped push natural gas production higher in Texas and some other states in August, but it wasn’t enough to keep the U.S. total from sliding to 76.60 Bcf/d, a 3.4% decline compared with 79.33 Bcf/d in July, according to the Energy Information Administration’s (EIA) latest Monthly Natural Gas Gross Production report. 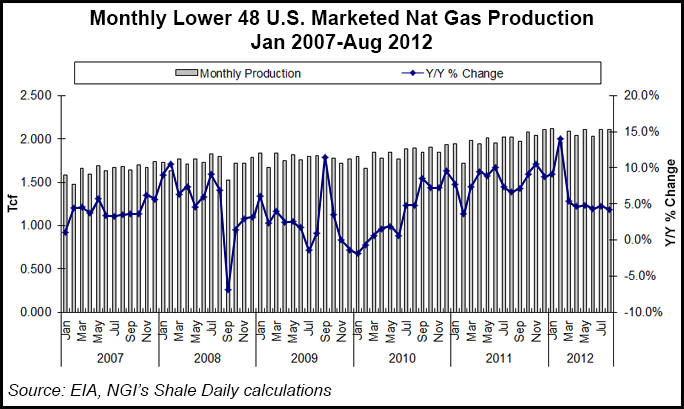 The Bureau of Safety and Environmental Enforcement estimated that 75.52% (3.264 Bcf/d) of daily natural gas production and 94.99% (1.311 million b/d) of daily oil output in the GOM was shut-in in the immediate aftermath of the storm.

Total combined natural gas purchase and sales volumes reached 124,752 TBtu in 2011, a 2.5% increase compared with 121,682 TBtu in 2010, according to an analysis by Natural Gas Intelligence (NGI) of 2011 Form 552 filings with the Federal Energy Regulatory Commission (see Shale Daily, May 30). The 552 data showed that while the rate of growth in combined volumes was down from the 6.0% year-to-year gain reported last year (see Shale Daily, July 14, 2011), the 2011 total yearly combined volume was the highest volume recorded since the Commission began releasing the data in 2009.

Lower 48 marketed production, which includes ethane and therefore may be a better indicator of total available supply to the U.S. consuming public than pure dry gas production, came in at 2.109 Tcf in August. That was down 0.2% month-over-month, but still up 4.2% year-over-year. While that year-over-year increase is the smallest thus far in 2012, it marks five consecutive months that production has increased between 4%-5% over the same month last year, which suggests production when compared to last year may have stabilized.

For the week ending Nov. 1, working inventories totaled 3,908 Bcf, according to EIA’s Weekly Natural Gas Storage Report, a 136 Bcf increase over the similar week last year and 259 Bcf above the five-year average.