Consumption of natural gas in both the United States and Mexico is on the rise, according to the U.S. Energy Information Administration (EIA), which once again revised its natural gas price forecasts upward for the rest of 2013 and 2014. 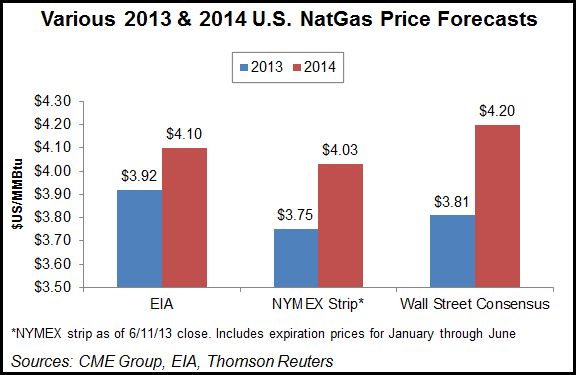 EIA expects domestic natural gas consumption to average 70 Bcf/d this year, compared with 69.7 Bcf/d in 2012, and to slip to 69.6 Bcf/d in 2014. “Colder winter temperatures forecast for 2013 and 2014 (compared with the record-warm temperatures in 2012) are expected to increase the amount of natural gas used for residential and commercial space heating,” the agency said in its Short-Term Energy Outlook, which was released Tuesday.

Natural gas spot prices averaged $4.04/MMBtu at the Henry Hub in May, down 13 cents from the $4.17/MMBtu average seen the previous month, EIA said.

Natural gas marketed production is projected to increase to 70.0 Bcf/d in 2013 and to 70.4 Bcf/d in 2014, compared with 69.2 Bcf/d last year. “Onshore production increases over the forecast period, while federal Gulf of Mexico production declines,” EIA said. “Natural gas pipeline gross imports, which have fallen over the past five years, are projected to remain near their 2012 level over the forecast.” LNG imports are expected to remain at minimal levels of about 0.4 Bcf/d in both 2013 and 2014.