Although natural gas forward prices steadied a bit during the June 18-24 period, the stage was set Thursday for a massive sell-off after the latest government storage data amplified fears of containment this fall. 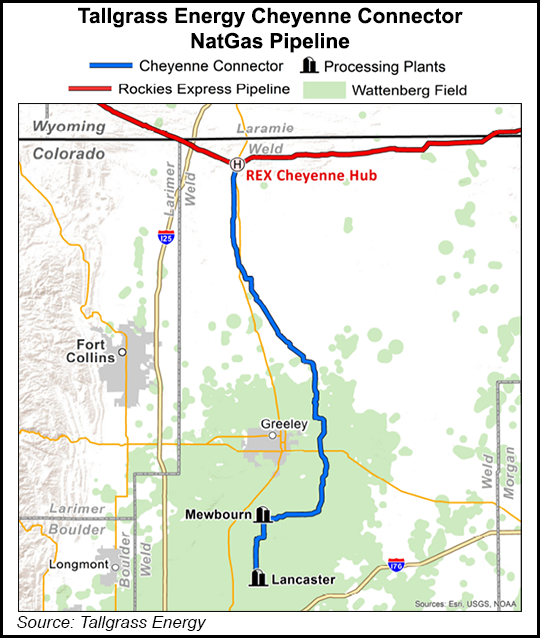 The Energy Information Administration (EIA) reported that inventories for the week ending June 19 rose by a much larger-than-expected 120 Bcf, boosting stocks above 3 Tcf, with four months remaining in the traditional refill season.

“We’re going to run out of room,” said a market observer on The Desk’s online energy platform Enelyst.

The EIA’s reported 120 Bcf build compared to injection estimates in a Bloomberg survey ranging from 100 Bcf to 114 Bcf. A Wall Street Journal survey produced an average build expectation of 105 Bcf, while a Reuters survey of 17 analysts produced a 90 Bcf to 115 Bcf injection range and a median of 106 Bcf. NGI was on the right side of estimations at 116 Bcf, but even then, fell short.

“I was bearish, but wow…120 Bcf is beyond my worst expectations,” said NatGasWeather analyst Andrea Paltrinieri, who had forecast a build of 113 Bcf.

“Prices were down even before the number, as the market was anticipating high-side risk, but the magnitude of the miss was the true shocker,” said Bespoke Weather Services.

Bespoke said elevated wind played some role in the monstrous injection, but “the lack of heat has definitely not been natural gas’ problem. It would help to have more in the South, but this isn’t a weather issue really.”

Instead, with injection estimates falling short in the South Central, it appears that liquefied natural gas (LNG) demand is the culprit. Feed gas volumes remained below 4 Bcf/d throughout last week as low international gas prices kept U.S. LNG out of the money.

Farther east, flows to Cameron liquefaction facilities have been ramping up from lows of 1.1 Bcf/d to Thursday’s value of 1.92 Bcf/d, which indicates an approach toward maximum operational capacity of all three trains.

However, there are new bearish signals emerging. China, whose demand has rebounded sharply since April, had to once again close down schools and businesses amid a new outbreak in which 256 new Covid-19 cases emerged between June 11 and 23.

Meanwhile, Ukrainian imports of gas piped in from more than 50 companies across Europe are to be halted at the Budince interconnection point from Aug. 11-Oct. 1 for urgent repairs, according to Ukrainian transmission system operator (TSO) GTSO. Without a solution for ensuring exports of European gas to Ukraine continue during the outage, gas pricing could crater. Any additional weakness in European pricing could be the nail in the coffin for U.S. LNG demand, with cancellations of up to 45 cargoes already expected through August.

Goldman Sachs Commodities Research said in a note to clients on Thursday LNG export cancellations were likely to add more than 760 Bcf to U.S. gas storage by the end of October, which could force additional production shut-ins “to prevent a storage breach.”

The financial firm led by analyst Samantha Dart lowered its October Henry Hub forecast by 35 cents to $1.40 and said the prospect of high storage inventories and more shut-ins is necessary in a world teeming with natural gas and little demand.

Adding insult to injury, with higher oil prices having lured producers to start bringing back some previously curtailed output, a boost in associated gas supply also has begun weighing on prices. Forward prices for the winter tumbled an average 10.0 cents, while prices for next summer (April-October) fell 5.0 cents on average, Forward Look data show.

RBN Energy LLC noted that gas production in the Permian Basin averaged 10.90 Bcf/d last week, on par with the month-to-date average but higher than the May average of 10.56 Bcf/d. Still, with the Permian rig count as of June 19 down to 132, versus 439 a year ago, any recovery in output is likely to be gradual.

EBW Analytics Group said there also is a smaller risk that curtailed Appalachian volumes may return in early July, potentially adding 1.5-2.0 Bcf/d of supply to the market. EQT’s production curtailment of 1.4 Bcfe/d was originally intended to last through the second quarter.

“While Appalachian spot prices remain weak, there is an incremental bearish risk that the return of curtailed production could tilt the supply/demand balance in a bearish direction,” EBW said. “Similarly, curtailed output by CNX Resources and others may add to downward pressure.”

Genscape has indicated that it has not seen additional line packing nominations since Tuesday (June 23), when total receipts hit 250 MMcf, the likely max required to begin operation. These projects will add 600 MMcf/d of incremental throughput from the Denver-Julesburg (DJ) Basin up to and via Rockies Express Pipeline (REX) to various demand markets for two shippers, DCP Midstream LP and Occidental Petroleum Corp.

However, given that Niobrara gas production is down and there’s likely no new production waiting behind the capacity, gas flows on the two projects may come down to economics, according to RBN analyst Sheetal Nasta. “The two projects are entering service in a very different market than when they were greenlighted, which was well before the oil price collapse and Covid-19.”

Operator Tallgrass Energy LP first marketed the pipeline and hub service capacities in 2017, but it wasn’t until last September that it received its final Federal Energy Regulatory Commission authorization and began construction.

Gas production from the Niobrara formation in Colorado, which includes the DJ and Powder River Basin, during that time was in a prolonged upswing, surpassing historical highs starting in 2018 and reaching a peak just shy of 6 Bcf/d in December, according to RBN. Associated gas production has since fallen to an estimated 5.5 Bcf/d in May, with the EIA’s Drilling Productivity Report data projecting further declines for June and July.

“Given that production is down and there’s not likely new production waiting behind the projects, flows on the pipe, will have to occur at the expense of flows on Colorado Interstate Gas (CIG), at least for now,” Nasta said. Both shippers also hold capacity on CIG, “which means the decision to flow on Cheyenne Connector versus CIG will likely come down to variable-cost economics on each pipe.”

However, there’s also uncertainty about where the gas would go from there as a lack of pipeline commitments on the REX mainline would prevent gas from flowing farther east while other regional dynamics also complicate the economics.

“There are multiple competing factors and lots of uncertainty around production and exports that make it difficult to know how much will flow on these projects and where the gas will head from Cheyenne Hub,” Nasta said.

Nevertheless, the in-service of the two projects appears to have kept nearby forward prices propped up at CIG. Amid a sea of red, July prices at CIG were flat for the June 18-24 period at $1.450, although the balance of summer slipped 4.0 cents to $1.460 and the winter strip dropped 10.0 cents to $2.410, Forward Look data show.