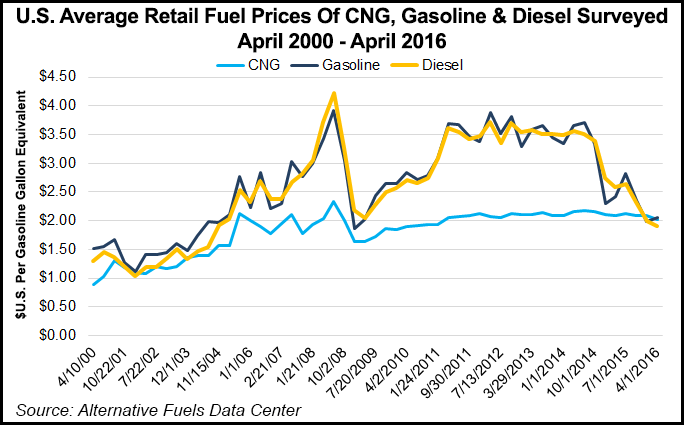 EDF officials said during a conference call that the response to the 2012 standards, designed to phase-in through the 2025 model year, has been overwhelmingly positive. The auto industry stepped up to meet future model year standards today, and offered federal officials a clear indication that more technology advances are forthcoming that will meet even more stringent efficiency and emissions requirements beyond 2025, they said.

EDF’s action was prompted by the U.S. Environmental Protection Agency’s (EPA) mandate to conduct a midterm evaluation of the long-term standards already in place for these vehicles. The standards and EPA assessment, which are expected soon, have implications for the alternative fuel and natural gas vehicle (NGV) sectors, but mostly indirectly.

Innovation is sweeping through all of the vehicle sectors, including medium- and heavy-duty vehicles where NGVs are having the most impact, according to Vickie Patton, EDF general counsel. She conducted the conference call with Chester France, a former senior official in the EPA transportation/air quality office and now an EDF consultant.

“With the convergence of technology advances, I think we are seeing sort of a ‘race to the top’ in which automakers are deploying some of the technologies EPA forecast for the future in much deeper penetrations, and those technological advances are going to continue in ways we cannot fully predict,” Patton said. “What we do know is that the pace and scope of change is far exceeding the federal government efficiency standards.”

For the nation, Patton thinks this means that whatever future fuels are deployed, the United States will be able “to meet important imperatives to advance climate and other environmental initiatives at a fraction of the cost previously.” She said EDF has tracked tremendous advances in the heavy-duty truck sector.

Nevertheless, some players in the NGV sector have recently expressed concerns that the long duration of low oil prices is making it more difficult for fleet operators to make the conversion from diesel to natural gas (see Daily GPI, June 16).

France said that the GHG emissions rules are fuel-neutral. “It is basically a tailpipe standard, and NGVs get a credit in terms of their greenhouse gas tailpipe emissions,” he said. “If anything, there are incremental incentives to the extent those alternatives are cleaner than petroleum-based fuels.”

Matt Godlewski, president of the Washington, DC-based NGVAmerica, said his trade association has not weighed in on the mid-term light-duty standards. “We are following the dialogue between the automakers and EPA/National Highway Traffic Safety Association and have participated in meetings to understand what is happening, but at this point I do not expect that we will weigh in,” he said.