Everyone knows “Texas tea” means oil, but in the Lone Star state, ethylene produced from booming supplies of natural gas liquids (NGL) might come to be known as “Texas sweetened tea” for the profitability it’s bringing to the Gulf Coast petrochemical industry. 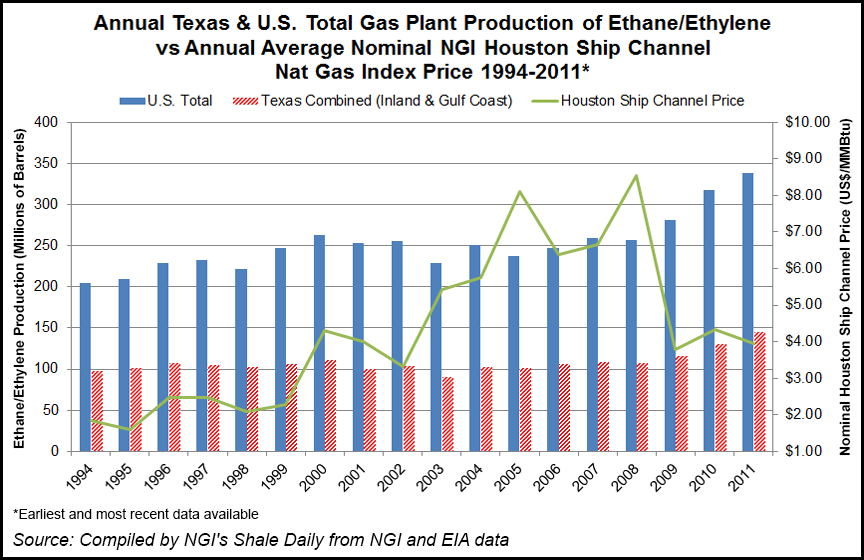 Ethane and propane are key NGLs used in the production of ethylene. Global ethylene production slowed in the decade preceding the last recession and demand was concentrated in emerging markets where U.S. producers couldn’t compete due to a strong dollar and international transportation costs, said Jesse Thompson, an economist with the Houston Branch of the Federal Reserve Bank of Dallas.

“The unlocking of hydrocarbons within shale and the resulting decline in natural gas prices — from $6.26/Mcf in 2007 to $2.40/Mcf in the first half of 2012 — changed the petrochemical industry,” Thompson wrote in a recent note.

Texas shale plays, notably the Eagle Ford and Barnett shales, have been at the forefront of the shale gas and oil revolution, making Texas “a highly cost-effective place to invest in new petrochemical plants, even if the market for that new production is in emerging economies,” Thompson wrote. “Ethylene capacity is poised to increase almost 33% by 2017, pending completion of all new plants, expansions, enhancements and restarts of shutdown facilities that have been announced in the U.S.”

The competitiveness of U.S. ethylene is thanks to the divergence of natural gas and oil prices. The price of naphtha, an alternative ethylene feedstock that is relied upon heavily outside of the United States, has followed oil prices higher. “…[I]t cost 60 cents to produce a pound of ethylene with nearly 12 cents worth of ethane in September 2012; alternatively, one pound of ethylene required $1.37 of naphtha,” Thompson wrote.