In an attempt to preserve liquidity and maintain the momentum it has achieved since going public in June, Appalachian pure-play Eclipse Resources Corp. has cut its rig count in the Utica Shale, plans to further reduce capital spending this year and is hoping to attract more capital with a joint venture (JV) partner. 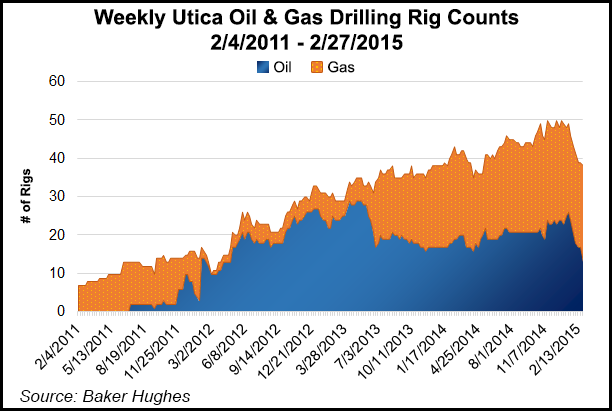 The company had nowhere to go but up last year, starting 2014 with just one operated Utica Shale well producing and finishing with 27. It also took its firm transportation portfolio from zero to 550 MMcf/d during the same time. But as production soared each quarter and liquidity ballooned to $575 million at year’s end, the company remained concerned about burning through cash in an uncertain commodity and financial environment that management views as a threat to its nascent growth (see Shale Daily, Dec. 5, 2014; Oct. 30, 2014; Aug. 14, 2014).

“It’s our opinion that in the current commodity environment it is a better long-term decision to slow down or pause on some of our activities while we see how the cycle unfolds,” said CEO Benjamin Hulburt. “It does not appear to us that continuing to rapidly develop our core assets and sell our valuable production in this depressed price environment is the best decision for the long-term growth of our company.

“It’s also worth noting that we have very little acreage that will be expiring in the next few years and that as such we believe it is a better decision to retain more of our asset base in the ground until prices recover.”

Eclipse elected to drop two of its rigs in January, which CFO Matthew DeNezza said will cost it $8 million. The company had already booked a $3.3 million rig termination expense in the fourth quarter. Through improving drilling and completion techniques, deferred completions, reduced service costs and a possible JV partner in the Utica, Eclipse is hoping it can underspend its $640 million budget by 50% this year. That was already down 20% from 2014 levels, and it remains unclear exactly how many wells the company will turn to sales this year (see Shale Daily, Dec. 29, 2014).

When it announced its capital spending plans in December, the company said it would turn 58 operated and non-operated wells to sales in 2015. But management acknowledged during a fourth quarter earnings conference call with financial analysts on Thursday that it would grow year-over-year production by 100% this year, rather than the 240-290% it announced late last year.

Hulburt said JV negotiations were underway, but added that he couldn’t provide details about how such an arrangement would be structured, saying instead that the company would have more details in the next two or three months once a deal is finalized.

“I don’t want to go too much into the details of our negotiations because they are ongoing,” he said. “The only thing we can say at this point in attempting to structure this, is we’re focused on putting together a structure that retains the greatest amount of our net asset value.”

For now, the company will run one rig in its “deepest, highest dry gas pressure bands” in Monroe County, OH, Hulburt said. Its production in the fourth quarter consisted of 75% dry gas and volumes throughout 2015 would look similar under its current plans to stick with gas. Hulburt said the company had about 40 wells in various stages of development at the end of last year, including 19 condensate wells it elected to defer with the fall in oil and natural gas liquids prices.

Management said it would need to see U.S. crude prices between $65 and $70/bbl to redeploy capital in that area. Eclipse controls more than 80% of its acreage in Ohio and it expects to also reduce its non-operated capital expenditures by 38% this year. Hulburt said a JV partner would for now work with the company in its dry gas window. The company’s operating partners include Antero Resources Corp. in Noble County, OH, and Magnum Hunter Resources Corp. — which is also seeking a JV partnership — in Monroe County (see Shale Daily, March 2, 2015).

The company’s production increased sharply last year, going from 4.5 MMcfe/d in 2013 to 73.5 MMcfe/d. In the fourth quarter, it increased 52% from the year-ago period to 130.7 MMcfe/d. It would have been higher, COO Thomas Liberatore said, if it hadn’t been for cold weather and delays in the start-up of Blue Racer Midstream LLC’s Berne and Natrium processing plants (see Shale Daily, Nov. 4, 2014).

Eclipse reduced its drilling times on average from 28 days per well in 1Q2014 to an average of 15 days per well for the rest of the year. It also tested tighter fracture stage completions and it will conduct its first 750-foot downspacing test on a Utica well in Monroe County this year. Currently, its Utica wells are on 1,000-foot spacing.

While service costs have come down for Eclipse, Hulburt said it would lean more on drilling efficiencies, deferrals and liquidity events to weather the current commodities downturn.

“As commodity prices go back up, I would expect to see service costs creep back up,” he said. “It’s tough to make a multi-year decision based solely on that. It’s a great benefit and it’s very helpful while commodity prices are down, but certainly it’s a variable cost and we try to plan the business on a multi-year strategy. It’s not something we can forecast forever.”

Eclipse also recorded a $35 million writedown last year on the legacy wells it acquired in 2013 from Oxford Oil Co. LLC, a move that CFO DeNezza said was no surprise “given the current pricing environment.”