Eclipse Resources Corp. is no longer an Ohio pure-play. The company announced on Monday a 44,500 net acre acquisition in north-central Pennsylvania, where it plans to apply its super laterals and expand Utica Shale development. 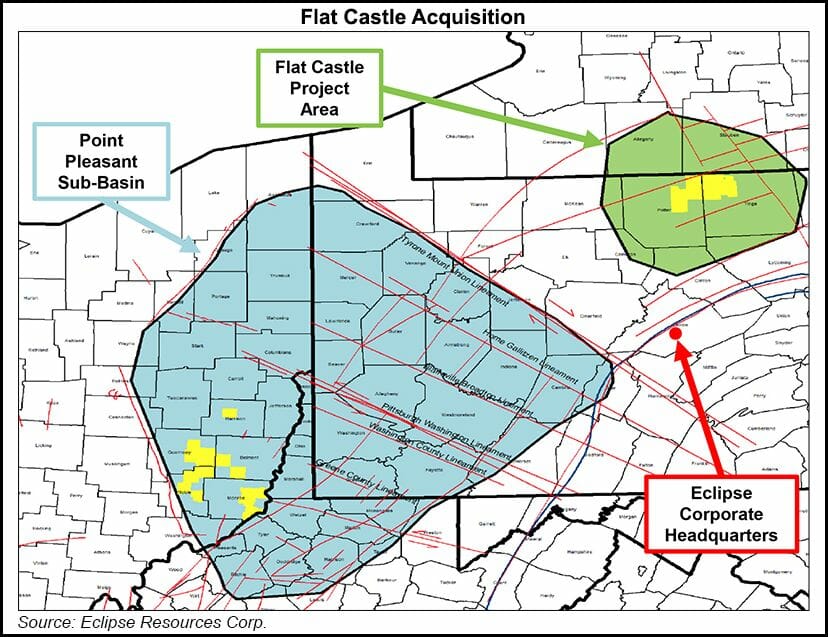 The company agreed to pay privately held Travis Peak Resources LLC $93.7 million in stock for the assets in Potter and Tioga counties. Eclipse reached a separate deal with Cardinal Midstream II LLC for the option to acquire Cardinal NE Holdings LLC for $18.3 million in cash, which would give it midstream infrastructure and associated gathering rights on the acreage being acquired.

The Flat Castle acquisition, as Eclipse is calling it, is expected to close in January. CEO Benjamin Hulburt said the Flat Castle project area is “located in one of the best underdeveloped areas of the Appalachian Basin and will nicely complement our existing asset base, with the potential returns on these wells competing with those in our core Utica dry gas acreage” in southeast Ohio.

The properties take their name from the Utica sub-members Indian Castle and Flat Creek. Since it was founded in 2011, Eclipse has focused almost entirely on the Utica and its sub-member, the Point Pleasant formation, in Ohio. The company holds more than 100,000 net acres in five counties there. Over the years, management has discussed the possibility of acquiring more Utica and Marcellus acreage in nearby Pennsylvania.

But Utica development in Tioga and Potter counties — hundreds of miles to the east of the core in southeast Ohio — is still somewhat nascent. Interest in the region has continued to grow since companies like Seneca Resources Corp. and Royal Dutch Shell plc successfully tested the formation there in 2013 and 2014.

“We believe the additional scale from this largely contiguous acreage acquisition will be enhanced through the efficiency gains generated by our super lateral development as we apply our operational and technical learnings from the Ohio dry gas Utica to the Flat Castle project area,” Hulburt said. “From a geological perspective, this area is similar in depth to our Ohio dry gas acreage and is well delineated with a meaningful number of offset results, while lying within what we believe to be the highest gas-in-place of the prospect area.”

Eclipse defines any lateral longer than 15,000 feet as a super lateral. The company has been focused on extending lateral lengths since last year to gain efficiencies, cut costs and boost returns. It set a company record during the third quarter when it drilled a 20,800-foot lateral in the Utica condensate window.

While it’s acquiring just one proved developed producing well in the transaction, Eclipse said the acreage has largely been delineated with 22 Utica offset wells, including Travis Peak’s Painter 1H in Tioga County, which came online at 19 MMcf/d on a 7,150-foot lateral.

Initial Flat Castle type curves indicate estimated ultimate recoveries of 2-2.3/Bcf per 1,000 feet of lateral, which Eclipse said is consistent with, or even better than some of its assets in southeast Ohio. The acquisition is expected to add 87 net drilling locations.

Hulburt said the company plans to spud its first well in the Flat Castle area in the first quarter. Full development, he added, is expected to start in 4Q2018. Hulburt also noted that the acreage is farther to the west of constrained Marcellus production in northeast Pennsylvania and is served by both the Dominion Transmission and Tennessee Gas Pipeline systems.

Travis Peak’s website indicates that the sale would mean a company exit from the Appalachian Basin. It also has operations in the Midcontinent. Cardinal received another equity commitment from EnCap Flatrock Midstream over the summer to build out its Utica dry gas gathering system in Tioga County. It also sold interests in another midstream affiliate that served producers in southwestern Pennsylvania to a subsidiary of Energy Transfer Partners LP earlier this year.