As it continues pushing its lateral lengths this year, Ohio pure-play Eclipse Resources Corp. intends to drill two Marcellus Shale wells in eastern Monroe County and gather more data from a refractured (refracked) Utica Shale well that could open new horizons for the company this year. 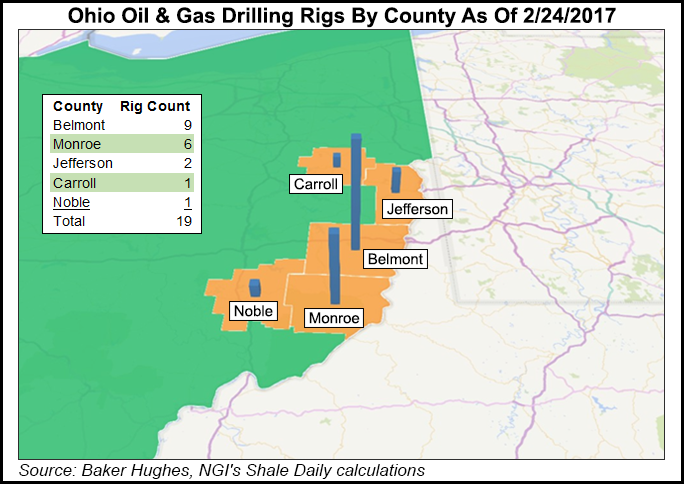 “We think this activity in the Marcellus is important as the market has not yet ascribed any real value to that acreage,” CEO Benjamin Hulburt told analysts on Wednesday during a year-end earnings call. Eclipse has plans for an 8,000-foot Marcellus lateral and a 10,000-foot lateral during the first half of the year.

Hulburt said the company also recently returned to a “vintage” generation one Utica well to conduct one of the first refracks in the formation. A production test has started, and Hulburt noted that the refrack “requires only a modest amount of capital and could be the basis for a broader program focused on a group of older wells.”

The company recently switched to third generation completions, which utilize tighter stage spacing and increased proppant loading, among other things. Eclipse is also pushing out its laterals after its successful Purple Hayes well last year in Guernsey County that was completed with a record-setting 18,544 foot lateral and 124 stages.

The company’s generation three wells have mostly been completed in wetter areas, but late last year it turned to sales its first five in the Utica dry gas window. While Eclipse has already increased its condensate and rich gas type curves to account for the generation three results, the new completion techniques used at the first dry gas pad to employ them continue to produce on average 30% above the company’s current type curve in the window.

The Marcellus wells drilled this year would also use the generation three completions. Eclipse plans to drill 24 wells with an average lateral length of 13,300 feet this year. Eleven of those are expected to be super laterals with lengths in excess of 15,000 feet. The company plans to turn 21 wells to sales and has budgeted $300 million for the year, or more than the $176.9 million it spent in 2016.

While prices firmed in the fourth quarter, they slid year/year. Including hedges and firm transportation, Eclipse recorded an average sales price of $2.76/Mcfe in 2016, down from $3.38/Mcfe in 2015.