Two-year-old Appalachia-based upstart Eclipse Resources I LP, under the management of several shale veterans, has more than doubled its holdings in the Utica Shale in a deal to acquire Oxford Oil Co. LLC, and with it 184,000 net acres and 13.8 Bcfe of proved developed producing reserves. 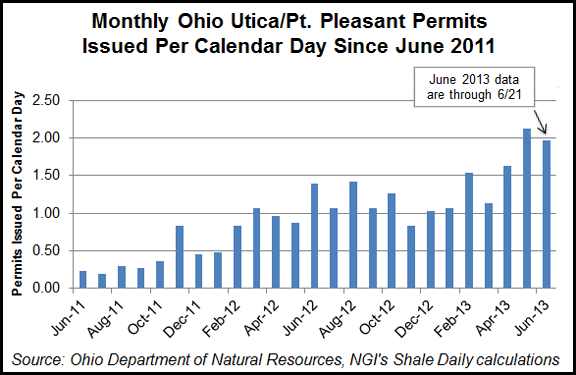 The transaction, valued at more than $800 million and funded in part by private equity partner EnCap Investments, creates a subsidiary of Eclipse to be named Eclipse Resources-Ohio, LLC. More than 50 Oxford employees are joining the company.

“We plan to grow our operated, Utica-focused rig count to up to five horizontal rigs running in the play between now and year-end 2014,” said Eclipse CEO Benjamin W. Hulburt. “While we plan to take a cautious approach to the oil window portion of the Utica Shale play, our 135,000 net acres in that portion of the fairway offer Eclipse tremendous additional upside should the industry prove the economic viability of extracting oil from the Utica Shale.”

Eclipse prior to the deal owned about 90,000 net acres across the Appalachian Basin, including 41,000 in Ohio’s Belmont, Guernsey, Monroe and Noble counties. Oxford’s acquisition gives Eclipse a total of 90,000 net acres in those counties. Eclipse has completed one well in Monroe County and five in Noble County. It has one rig running in the play and is participating in three nonoperated rigs. The Monroe County development is a joint venture with Magnum Hunter Resources Corp. on 1,950 net acres (see Shale Daily, Jan. 3). The partners plan to drill 12 horizontals each in the Marcellus and Utica shales over the next three years.

In total, Eclipse paid more than $800 million in equity and debt for Oxford. EnCap raised its stake in Eclipse to more than $500 million ahead of the acquisition, and an additional $300 million in debt was arranged by Jefferies LLC, which was sold to investors that included Magnetar Capital and Blackstone Group’s GSO Capital Partners. Eclipse has the option to offer an additional $100 million of debt in the next 12 months.

Eclipse was formed two years ago by EnCap and former executives from a variety of Appalachian operators, including Cabot Oil & Gas Corp. and Chesapeake Energy Corp. (see Shale Daily, June 3, 2011). Hulburt co-founded Rex Energy Corp. in 2001 and led its initial public offering in 2007. Marty L. Byrd, who is to join the company on Monday (July 1), most recently was Chesapeake’s vice president of land for the eastern division-Appalachian Basin. Byrd, who was tapped to be vice president of land, had managed and coordinated the land activities that resulted in Chesapeake establishing more than 600 horizontal well units and 400 horizontal wells with a 26-rig drilling program in the Marcellus Shale, Hulburt said.

Sights are set high for the Utica’s potential. At an early June shale symposium hosted by law firm BakerHostetler LLP, Rick Simmers, chief of the Ohio Department of Natural Resources’ (ODNR) Division of Oil and Gas Resources Management, told the audience to consider that nearly 280,000 conventional oil and gas wells had been drilled in Ohio since 1860 and that cumulative gas production from those wells equaled about 7 Tcf. He said that based on initial production reports, fewer than 2,000 unconventional wells drilled in the Utica could exceed the 7 Tcf mark in as little as eight years (see Shale Daily, June 10).