It was two-sided weekly natural gas trading for the week ended March 24 with eastern points along with Appalachia taking big hits offset to some degree by producing zones and Midwest market centers showing modest gains. The NGI Weekly National Spot Gas Average fell 22 cents to $2.85 led by declines in the Northeast, Southeast, and Appalachia. 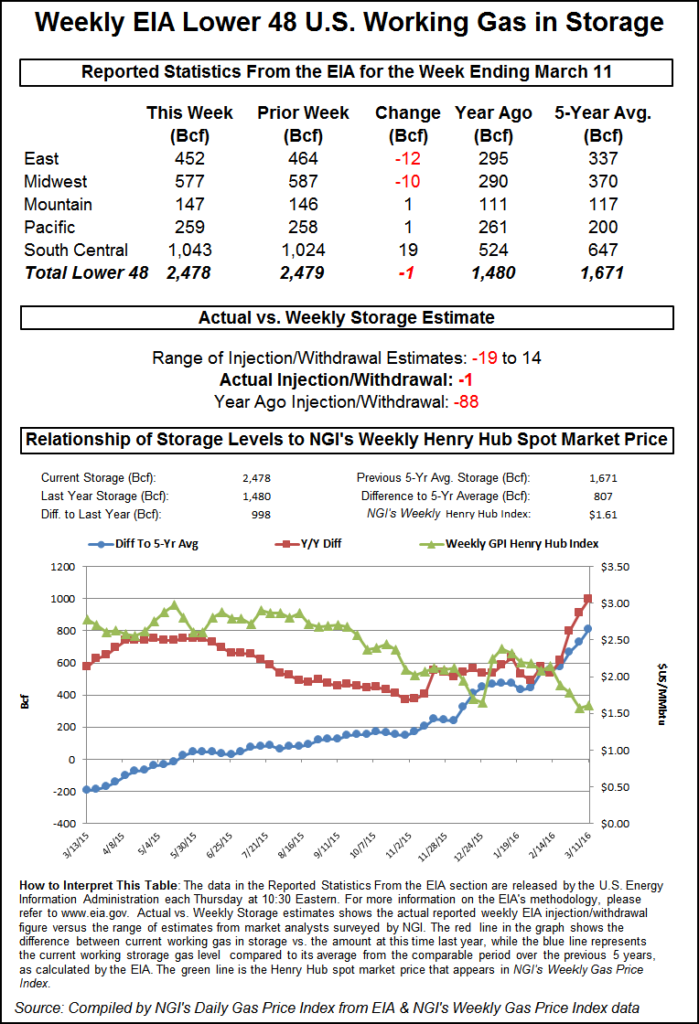 All other regions lost or gained a few pennies. The Midcontinent fell 2 cents for the week to $2.69, and the Midwest eased a penny to $2.91.

April futures for the week bounded back above the psychological $3 mark by adding 12.8 cents to $3.076.

Thursday saw the Energy Information Administration (EIA) report a withdrawal of 150 Bcf for the week ending March 17, exactly the result of a major wire service survey, and prices at first sagged but then managed to climb into positive territory by the end of trading on Thursday. April added 4.0 cents to $3.051.

Before the report, Raymond James and Associates was looking for a 138 Bcf withdrawal, and analysts at Wells Fargo calculated a 156 Bcf decline. A Reuters survey of 26 traders and analysts showed an average 150 Bcf pull with a range of -127 Bcf to -170 Bcf. Last year 13 Bcf was injected and the five-year pace is for a 21 Bcf pull.

The report wasn’t much of a surprise to analysts.

“We believe the storage report will be viewed as neutral,” said Randy Ollenberger, an analyst with BMO Capital Markets. “Storage is trending below last year’s levels; however, rising associated gas production should keep U.S. storage levels at or above five-year averages assuming normal weather.”

Tim Evans of Citi Futures Perspective said the number was “slightly less than other measures such as a Bloomberg survey for 153 Bcf in net withdrawals. The data was bullish compared with the 21 Bcf five-year average for the date, but this was not a surprise. We see the swing to warmer than normal temperatures over the next two weeks as leaving the market without a further fundamental reason to explore the upside.”

Inventories now stand at 2,092 Bcf and are 399 Bcf less than last year and 266 Bcf greater than the five-year average. In the East Region 59 Bcf was withdrawn, and the Midwest Region saw inventories decrease by 51 Bcf. Stocks in the Mountain Region were unchanged, and the Pacific Region was up 5 Bcf. The South Central Region dropped 45 Bcf.

The biggest changes were in the Northeast, but those paled in comparison to price moves earlier in the week. The NGI National Spot Gas Average eased a penny to $2.74, and futures trading was equally lackluster. April added 2.5 cents to $3.076 and May rose 2.2 cents to $3.153.

Major market points drifted lower. Gas for weekend and Monday delivery to the Chicago Citygate slipped a penny to $2.87, and packages at the Henry Hub were down 1 cent at $2.92. Gas on El Paso Permian was quoted 4 cents lower at $2.53, and gas priced at the PG&E Citygate eased a penny to $3.17.

Building new gas markets for power generation along the southern tier of the U.S. may be something of an uphill battle. A report by EnergyGPS, a Portland, OR-based energy and risk management firm, shows new capacity additions in the U.S. by type of generation. “Solar has grown from 4% of new capacity in 2010 to 39% of new capacity in 2016. Coal has declined from 32% in 2010 to 0% in 2016. Wind has ebbed and flowed during the same time period and is holding strong in 2016 at 26%.”

EnergyGPS notes that capacity increases are shown as MWdc rather than MWac. “The DC MWs represent how many MW are installed behind the DC to AC inverter. The AC MWs represent the amount power actually pushed onto the grid. For large solar installations the ratio of MWdc to MWac often exceeds a ratio of 1.3 depending on a variety of factors. The installation in 2016 of 14.7 GW is almost double the installations in 2015. This is impressive growth.

“Not surprisingly, California accounts for about one-third of total installations in the U.S. in 2016 coming in just over 5 GW. Western states account for five of the top 10 states. Interestingly, decentralized markets account for seven of the top 10. This may simply be due to the fact that the southern swath of the U.S., where the solar resource is best, is largely comprised of states that are outside of centralized RTO markets.”

Gas at Malin was unchanged for weekend and Monday delivery at $2.63 and deliveries to the SoCal Citygate shed 15 cents to $2.86. Gas priced at the SoCal Border Avg. Average fell 4 cents to $2.65 and Kern Delivery changed hands 2 cents lower at $2.64.

Natural gas futures opened trading Friday 2 cents lower as traders viewed the market as slightly overbought and little in the way of supportive weather seen on the horizon.

Traders see the market as a short-term sell and a long-term buy. “The 150 Bcf withdrawal was spot on average street expectations and hence, price-neutral,” said Jim Ritterbusch of Ritterbusch and Associates in closing comments Thursday. “The surplus versus five-year averages shrunk by a substantial 129 Bcf to 266 Bcf. But while additional shrinkage will likely be seen in next week’s data, the overhang should hold above the 240-245 region.

“However, keeping pace with normal injections next month could be significantly challenged by comparatively low production levels and consensus prospects for a hot summer. Overall, we are still viewing the ability of this market to maintain more than 80% of this month’s strong 15% gains in spite of little assistance from the weather factor as a bullish portent that could keep May futures elevated toward the high end of our expected $2.83-3.09 trading range.

“We still look for this market to evolve into a consolidation phase in which the $3 level per nearby futures represents somewhat of a no-man’s land as far as trade entry is concerned. We are still looking to sell rallies in May futures to around the $3.16 level for short-term traders. But we still prefer to wait for an eventual decline to below the $2.90 level to start accumulating investment-type long holdings along with some deferred bull spreads.”

On the supply front oil activity far outdistanced that of natural gas.

Twenty-one oil rigs returned along with one miscellaneous unit, offset by the departure of two natural gas rigs, according to Baker Hughes Inc.in its weekly report on rig activity. The Permian Basin dominated the week’s activity. Fifteen horizontal rigs came back, as did eight vertical units; three directional rigs left the game.

Texas and Oklahoma led the states in active drilling rig gains during the week ending Friday. Texas raised its tally by eight, and Oklahoma added seven. The U.S. land rig count overall gained 22 units to end the week at 787. One rig left the inland waters along with one departing the offshore to make for a net gain of 20 rigs to end the week with 809 active in the United States overall.

Gas buyers for weekend power generation across the PJM footprint will have a moderate amount of renewable generation to work with to offset gas purchases early on if weekend weather forecasts prove correct.

“A gusty southerly wind will boost wind generation today through early Saturday as high as 4-5 GW,” said WSI Corp. in a Friday morning report to clients. “Wind gen will subside during Sunday into early next week.

“A warm front and subsequent southwest wind ahead of a developing storm system over the central U.S. will quickly warm temps into the 50s, 60s to low 70s across the majority of the power pool today. The aforementioned storm system will track eastward and spread rain and thunderstorms into the power pool as the weekend progresses into early next week.

“Warm conditions will continue into Saturday, but some cold air associated with a backdoor cold front will bleed southward into portions of the Mid Atlantic during Sunday into Monday leading to a sharp contrast and changeable conditions.”