Gas for Friday and the extended weekend found few buyers as weather forecasts called for a sharp drop in temperatures Friday. 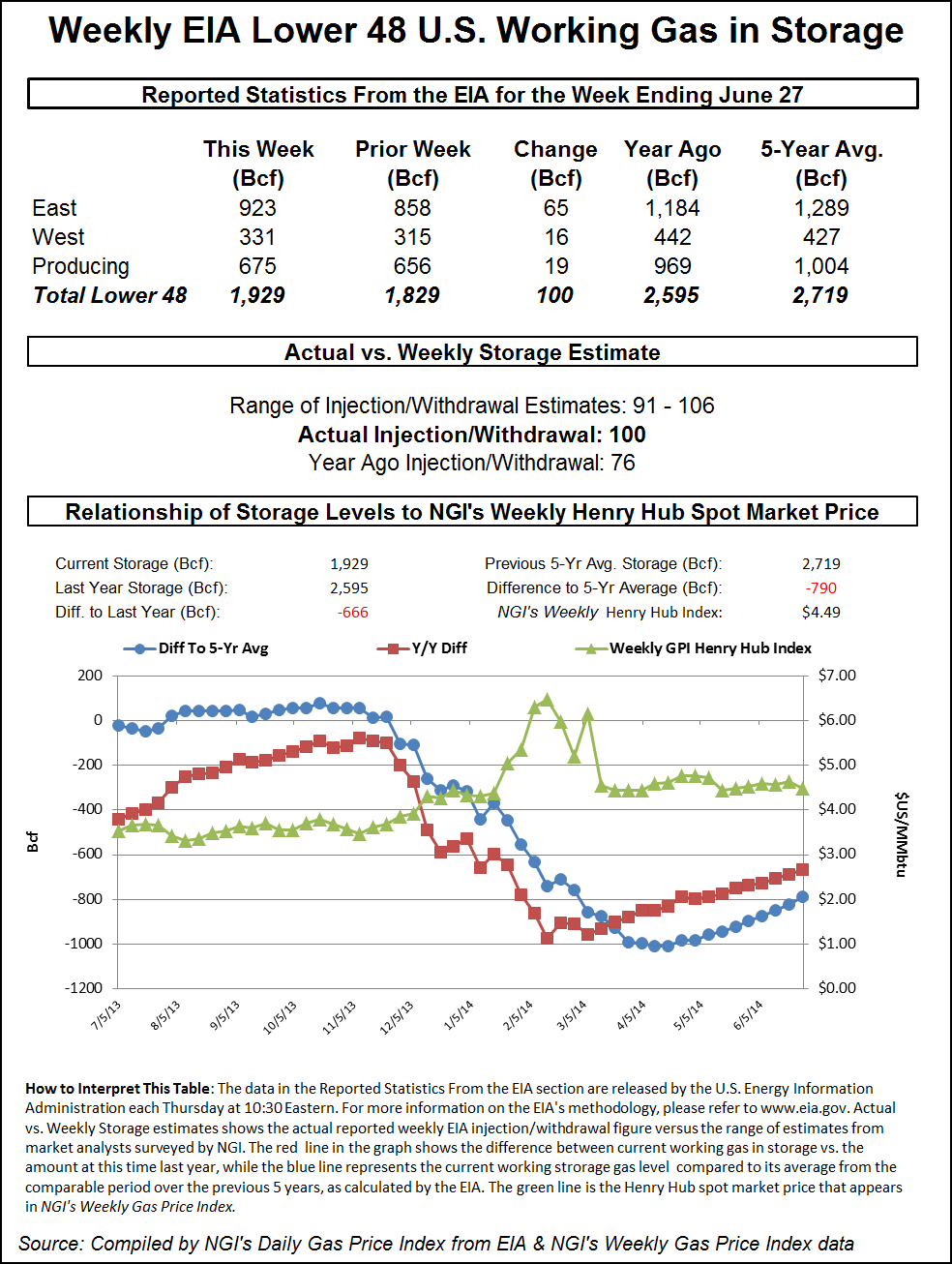 Futures managed to rise after a storage report continuing to show large injections well above historical levels. The Energy Information Administration reported an injection of 100 Bcf, almost precisely what traders were looking for, and if for no other reasons than the market failed to spiral lower as it had done on previous occasions, futures gained ground. August was 4.9 cents higher at settlement at $4.406, and September rose 4.7 cents to $4.395. August crude oil fell 42 cents to $104.06/bbl. The Dow Jones Industrial Average closed above 17,000 for the first time following a stronger than expected employment report.

Temperatures were forecast to drop sharply Friday at eastern points as Hurricane Arthur was expected to lower temperatures before heading to the Northeast out to sea. The National Weather Service in suburban Philadelphia reported that “Hurricane Arthur will pull away from the middle Atlantic coast and move off to the northeast early Saturday. Meanwhile…a cold front will cross the region tonight [Thursday] followed by high pressure for the weekend. The high will slide across the Ohio Valley and then shift to the south and east of the area, anchoring over the western Atlantic Sunday night into Monday. A Lee side trough looks to develop across our area on Monday and persist through Thursday, [and] a low pressure system well to our north will slowly push a cold front into the region Wednesday and Thursday.”

Forecaster Wunderground.com said the high Thursday in Washington, DC, of 91 degrees was anticipated to reach “only” 82 on Friday before reaching a toasty 96 on Monday. The seasonal high in Washington is 88. Philadelphia’s 93 high on Thursday was seen plunging to 78 on Friday but then rising to 93 on Monday. The normal early July high in Philadelphia is 84. Boston’s maximum of 92 Thursday was seen sliding to 79 on Friday before mustering a gain to 89 Monday. The normal high in Boston this time of year is 81.

Industry observers said they can’t dismiss the likelihood of a normal or even warmer than normal upcoming winter. “Just suppose there is a mild winter this winter,” said a Houston pipeline veteran. “We could come out with a pretty good overhang in storage, and the numbers don’t support putting in the high volumes we are now. Say we are putting in 70 Bcf weekly next year versus the 100-plus Bcf we are now because the demand isn’t there.

“Could that happen? Yes. You will see prices way below where they are now. Next summer already you see prices 40 cent to 50 cents below where we are now.”

“Potentially the market is saying that we will come out of winter 2014-2015 OK, if not oversupplied. You have to remember that a lot of people are tying in wells right now during the summer, and that gas will probably start flowing in the next two months. If you take what’s going to happen to supply, and leave out the market side of things, we will probably have a lot more supply coming on in the next few months that wasn’t being worked on as much during the winter. Certain areas are going to get oversupplied.” He suggested that Tennessee Zone 4 Marcellus and Transco Leidy might fall into that category.

In Thursday’s trading gas for the extended weekend on Transco Leidy fell 91 cents to $2.07, and deliveries on Tennessee Zone 4 Marcellus retreated 90 cents to $1.95.

Bears were looking for an encore performance when the Energy Information Administration (EIA) issued what was expected to be a similar-sized report to last week’s market pummeling 110 Bcf injection. Estimates this time around were for an increase just over 100 Bcf. United ICAP predicted an injection of 104 Bcf, and IAF Advisors in Houston was looking for 102 Bcf. A Reuters poll of 21 traders and analysts revealed an average 100 Bcf with a range of 91 Bcf to 106 Bcf. All estimates were well ahead of last year’s 76 Bcf injection and a five-year pace of 68 Bcf.

Bentek Energy calculated a build of 99 Bcf and noted high power consumption along with hefty injections. “Total U.S. power burn demand grew by 0.9 Bcf/d week-over-week, and is the second straight week with power burn sustained above the 24 Bcf/d mark. The expected injection marks the first week since the May 2 storage week with a build below triple-digits as the country moves into peak power burn demand months. Total population-weighted cooling degree days remained fairly flat week-over-week, with 67 degree days reported compared to the previous week’s total of 65. However, the sustained level of higher temperatures could have impacted storage to a greater degree than what the fundamentals suggest, which was reflected in Bentek’s sample of injections.”

Tim Evans of Citi Futures Perspective saw the 100 Bcf build as “still bearish relative to the 68 Bcf five-year average for the date. The build was somewhat less than the 106 Bcf forecast from our own model, suggesting some minor tightening of the background balance in the market relative to the prior week’s 110 Bcf build, but not a major change.”

Inventories now stand at 1,929 Bcf and are 666 Bcf less than last year and 790 Bcf below the five-year average. In the East Region 65 Bcf was injected and the West Region saw inventories up by 16 Bcf. Inventories in the Producing Region rose by 19 Bcf.

Arthur had not gone away as of 5 p.m. EDT Thursday. At that time the National Hurricane Center (NHC) said Hurricane Arthur was 35 miles south of Cape Fear, NC, and was sporting 90 mph winds. It was moving to the north-northeast at 13 mph, and “the core of Arthur is expected to pass near or over the coast of North Carolina and the Outer Banks tonight [Thursday]. The center of Arthur is forecast to pass east of the Mid-Atlantic coast Friday and approach Nova Scotia Friday night.”

Joe Bastardi at WeatherBELL Analytics sees Arthur hitting the Outer Banks. “Consider that the pressure is down 12 millibars (mb) in 24 hours and it’s now coming into the best area for intensification. Basically, the ECWMF [European model] is in line with us. It has this to 967 mb with 85 knot winds by tomorrow morning. The track NHC has is right on ECMWF but it is disturbing to see models notorious for being too far east being farther west. The GFS [Global Forecast System] track is from Cape Lookout to Oregon Inlet, which is the worst path possible for the Outer Banks.”