Values of physical gas for Thursday delivery stood pat in Wednesday’s trading, with large double-digit losses at eastern points canceling out broader gains at most other market points. 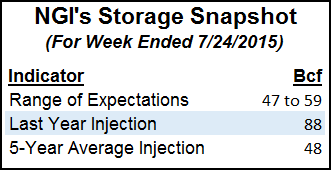 Overall, the market was flat at $2.73, with declines in New England and the Marcellus battling gains in the producing zones, Midwest market zones, and those points more closely tied to the Henry Hub. August futures expired on a firm note. At the close, August had gained 6.5 cents to $2.886, and September was higher by 4.8 cents to $2.864. September crude oil added 81 cents to $48.79/bbl.

Gas buyers for PJM power generation have been busy this summer even though temperatures have not hit any records. According to industry consultant Genscape Inc., however, the PJM burn-per-degree has reached levels not seen in years.

On Tuesday, the nominated gas burn in PJM “reached a summer-, year-, and two-year-to-date high [amid temperatures that have been warm but by no means record hot themselves,” the firm said in a report.

“Gas nominations to power plants reached 5,742 MMcf/d…in the PJM market, a level not seen during the summer strip since July 2013. However, during that period temperatures were substantially warmer, revealing this summer’s actual burn-per-degree is much higher and burn levels will set new records when/if temperatures rise. In July 2013 burn peaked at 6,428 MMcf/d during a period when population-weighted net cooling degree days [PWCDD] neared 22 CDDs. When [Tuesday’s] demand peak hit only 15.5 CDDs were registered. This supports a trend that has been in force since late May, wherein the region’s burn levels have increased above those at the same temperature in previous years.”

Genscape analysts said the total burn since May 1 has averaged 3.839 Bcf/d, the highest since 2012, “though CDDs this summer have averaged just 5.8 versus the 8.2 average from summer 2012. Lower gas prices and coal retirements have increased gas use for power generation in the market to levels rivalling and exceeding summer 2012.”

Eastern temperatures, however, were still forecast above normal. AccuWeather.com predicted Wednesday’s high of 87 in Boston would rise to 88 Thursday and 90 on Friday. The seasonal high in Boston is 82. New York City’s Wednesday high of 94 was anticipated to slide to 90 Thursday and Friday, still 6 degrees above normal.

Futures traders saw the warm temperatures prompting a try at $3.00, but “you’re going to have some resistance at $2.94, and the market doesn’t seem to have enough push to get it higher,” said a New York floor trader. “There’s no pushing the market around like there used to be in the old days. It’s an electronic game. It now trades in ticks and not half cents.”

“The latest six-10 day period forecast is warmer” than Tuesday’s forecast across most of the nation, except the Northwest, said WSI Corp. in its Wednesday morning report. “As a result, PWCDD are up 2.4 to 59.7 for the CONUS. Forecast confidence has improved and is average today. Medium-range models are in much better agreement when compared to [Tuesday], but there are still some technical and timing issues. The risk is to the cooler side over the north central and eastern U.S., even the West Coast.”

Gas buyers for power generation across the PJM footprint won’t be able to count on a lot of wind generation to offset purchases. “Seasonably hot and humid conditions are expected across much of the power pool during the next couple of days,” WSI said. It added that there would be a “south-to-west wind associated with the cold front” to support more wind generation into Wednesday night. “Output is forecast to peak in excess of 2 GW. A variable westerly breeze will support modest wind generation during the end of the week into the weekend.”

Looking ahead to Thursday’s storage report, Tim Evans of Citi Futures Perspective said the consensus view “is still forming, but estimates we’ve seen so far suggest expectations running in the 56-57 Bcf range, not too different from our own model’s 54 Bcf forecast. This will mark a seasonal reduction from the 68 Bcf inflow (prior to the 7 Bcf reclassification) from last week, but still modestly bearish compared with the 48 Bcf five-year average refill. With the warmer 11-15 temperature outlook, the forward storage prospects look a bit less bearish than a day ago.”

Evans’ data shows the year-on-five-year surplus growing from its present 81 Bcf to 87 Bcf by Aug. 14. “While still not a clear support for prices, we think this represents less of a headwind for price recovery, which may be enough to allow prices to rally from what we continue to see as a conservative valuation for natural gas trading near the bottom of the five-year range for this time of year.”

Other estimates include IAF Advisors at 53 Bcf and a Reuters poll of 24 traders and analysts showing an average 54 Bcf with a range of 47 Bcf to 59 Bcf. Last year 88 Bcf was injected, and the five-year average stands at 48 Bcf.

Evans has rolled his previous long August position to a long September after “we took a 10.9-cent profit on the related August trade. We recommend maintaining a protective sell stop at $2.72 to limit exposure.”