The physical natural gas market, on average, gave back most of Wednesday’s meteoric gains, but the results were largely skewed by multi-dollar drops at East Coast metropolitan markets. 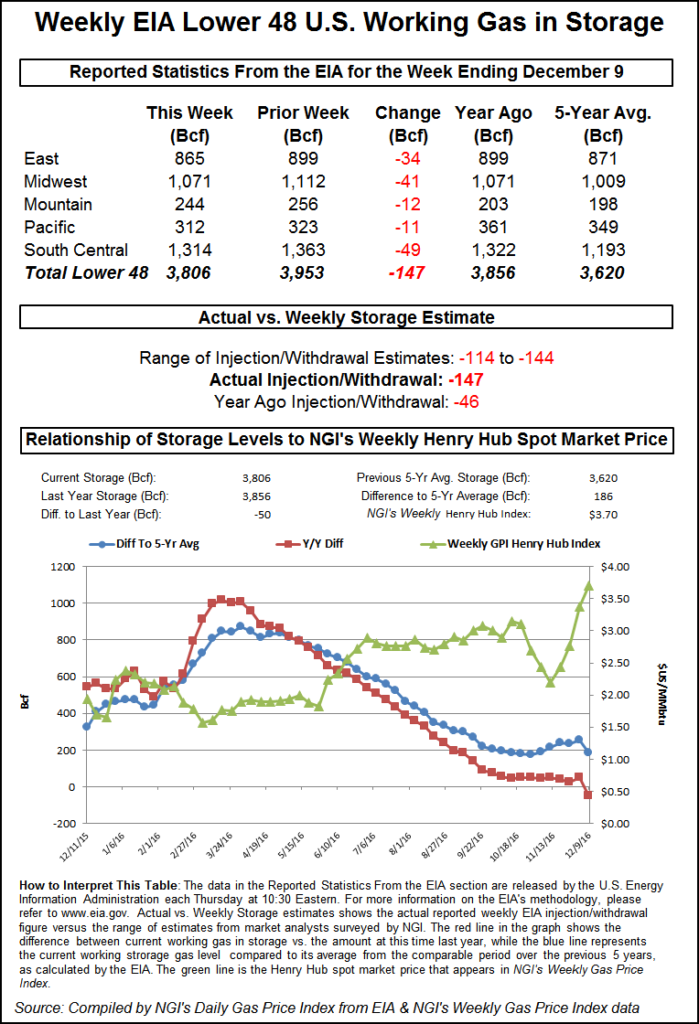 Midwest market zones and producing zones generally moved by either side of a nickel as traders, for the most part, battened down the hatches before the Energy Information Administration (EIA) storage report.

The NGI National Spot Gas Average fell 58 cents to $3.93. Futures bulls were treated to a supportive storage report with EIA disclosing storage withdrawals much higher than anyone estimated, and although prices advanced initially, at the end of the day January had fallen 10.6 cents to $3.434 and February was off 8.8 cents to $3.470. January crude oil fell 14 cents to $50.90/bbl.

Once the EIA storage number rattled across trading desks, futures traded higher. EIA reported a 147 Bcf storage withdrawal in its 10:30 a.m. EST release, whereas traders were expecting a pull of about 19 Bcf less. January futures reached a high of $3.589 immediately after the figures were released and by 10:45 a.m. January was trading at $3.552, up 1.2 cents from Wednesday’s settlement.

The figure was well beyond expectations. A Reuters survey showed an average 128 Bcf withdrawal with a range of 114 Bcf to 144 Bcf.

“We were hearing a number of 123 to a 124 draw, so this is something of a surprise,” said a New York floor trader. “I’m putting support at $3.50 and resistance at $3.75. It looks like people are looking at the weather reports and not the storage.”

“The 147 Bcf draw for last week was above the range of expectations and also above the 79 Bcf five-year average for the date, a clearly bullish report that implies greater sensitivity to cold temperatures than anticipated, a possibly ongoing factor,” said Tim Evans of Citi Futures Perspective.

“This drawdown was 17 Bcf below our estimate of 130 Bcf and outside the range of most other analyst estimates as well,” said Harrison, NY-based Bespoke Weather Services. “Bearish weather trends should temper any rally today, though.”

Steve Blair, vice president at Rafferty Technical Research in New York, said he was “very surprised by the market’s reaction. You get a storage number that is almost 20 Bcf above expectations you would expect the market to rally right off the number. The only thing I can think of is that people are focused on weather forecasts to get warmer between now and the end of the month.

“We are putting technical support at $3.38 and then $3.30. We are closer to the major support right now, and I have a feeling that off today’s action unless something changes weather-wise we’ll probably see some more downside [Friday].”

Inventories now stand at 3,806 Bcf and are 50 Bcf less than last year and 186 Bcf more than the five-year average. In the East Region 34 Bcf was withdrawn and the Midwest Region saw inventories decrease by 41 Bcf. Stocks in the Mountain Region fell 12 Bcf, and the Pacific Region was down 11 Bcf. The South Central Region shed 49 Bcf.

Overnight weather models moderated. “The latest six-10 day forecast features a moderating trend across the CONUS,” said WSI Corp. in its morning report to clients. “[Thursday’s] forecast is generally warmer than yesterday’s forecast. As a result, CONUS GWHDDs are down 5.8 to 141.5 for the period. These are now 8.3 below average.

“The forecast has minor risks in either direction given the model spread with the details of a couple of potential storm systems. There is slight cooler risk along the East Coast and Southwest, but the south-central U.S. could run even warmer by the end of the period.”

Physical market trading saw titanic declines along the eastern seaboard as weather forecasts called for an abrupt temperature turnaround by the weekend. Wunderground.com predicted that Boston’s Thursday high of 32 would drop to 18 by Friday but surge back to 41 on Saturday, right at the seasonal norm. New York City’s Thursday max of 36 was seen dropping to 27 by Friday before scooting up to 44 on Saturday, one degree above normal.

Next-day power prices and load forecasts didn’t help the cause of higher prices either. Intercontinental Exchange reported that on-peak power Friday at the PJM West terminal fell $12.04 to $56.42/MWh and power at the Indiana Hub shed $9.16 to $51.95/MWh.

The PJM Interconnection forecast that Thursday’s peak load of 44,895 MW would slide to 43,091 MW Friday.