The Kentucky Oil and Gas Association’s (KOGA) first comprehensive research of the economic impact of the oil and gas industry found that the state had 14,632 producing natural gas wells in 2011 and produced more than 3 million bbl of oil in 2012, but the number of horizontal well permits issued has declined each year since 2009. 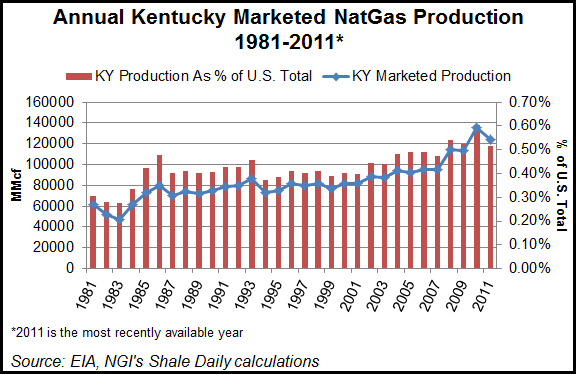 Oil and natural gas severance taxes totaled $34.5 million in Kentucky in 2012 as the industry, which is centered in the eastern part of the state, continued its comeback from the economic crisis of 2008.

Permits for new wells in the state peaked at 2,014 in 2008, but “the Great Recession’s impact on natural gas and oil prices lead to a steady decline in drilling permits over the past four years,” according to KOGA. “In 2012, only 920 permits for new wells were issued by the Division of Oil and Gas. The recent uptick in natural gas prices, along with oil prices hovering above $90 barrel, is seen as an opportunity for Kentucky to reverse that trend in 2013.”

According to the Energy Information Administration, Kentucky natural gas marketed production hit an all-time high of 135,330 MMcf in 2010, but dropped to 124,243 MMcf in 2011, the last year for which complete data is available.

About 9,000 Kentuckians are either salaried employees or proprietors in oil and gas and its support industries, KOGA said.

“The industry is making a comeback from the low natural gas prices over the past few years, and we’re looking forward to creating jobs in our communities and for the state,” said KOGA President Doug Hyden.

Since 1981, Kentucky every year has typically contributed 0.3-0.5% of total U.S. marketed natural gas production, and 0.1-0.2% of total U.S. crude oil production. The state produced no coalbed methane between 2005 and 2010, according to Energy Information Administration data.