Physical natural gas for Friday delivery was mostly lower in Thursday’s trading with losses at eastern points offset by moderate changes within a cent or two of unchanged in the Great Lakes, Rockies and California. New England proved to be the day’s biggest loser, suffering triple-digit losses as temperatures were forecast to return to normal. Overall, the physical market shed 3 cents. 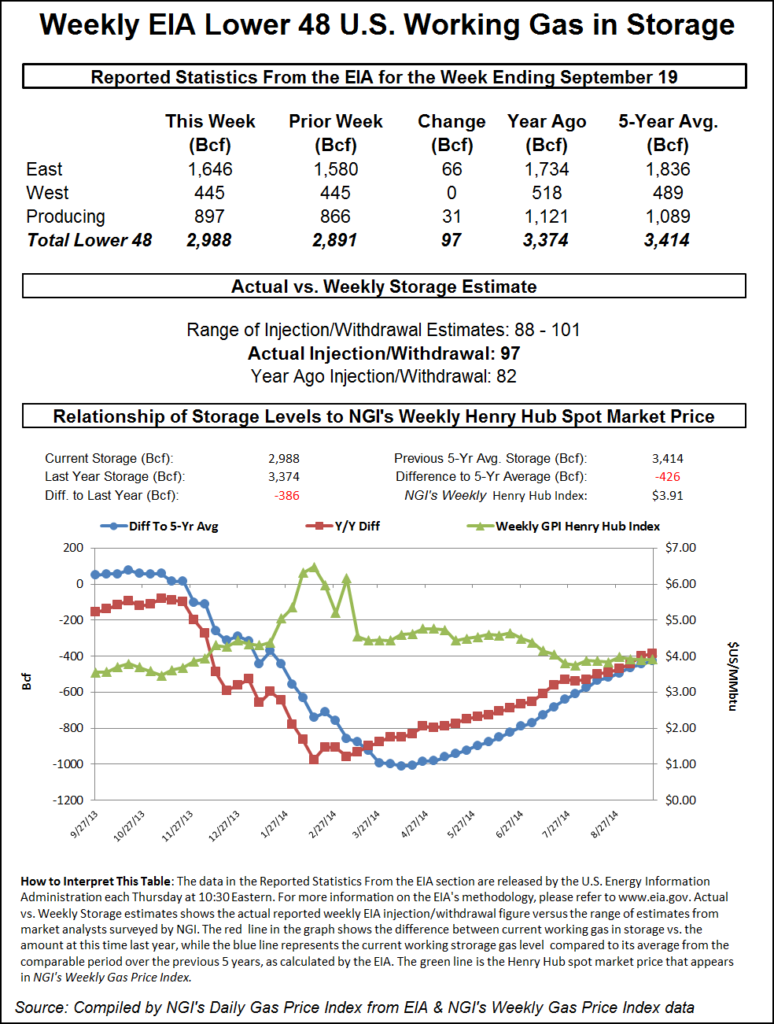 The Energy Information Administration reported a storage build of 97 Bcf, and once the report was released prices fell only to recover and finish solidly in the black. At the close, October had risen 6.0 cents to $3.971 and November was up by 4.9 cents to $4.014. November crude oil fell 27 cents to $92.53/bbl. For now, the market seems unimpressed with the machinations on Wall Street as the Dow Jones Industrial Average dropped 264 points. It was the largest decline in two months and was led by a weak technology sector.

Next-day gas prices at New England points took a hit, but it was due largely to a moderation of weather and a return to a more normal temperature regime. AccuWeather.com forecast that Boston’s high Thursday of just 61 degrees was expected to rise to 71 Friday and reach a pleasant 78 on Saturday. The seasonal high in Boston is 69. Providence, RI’s high of 61 Thursday was seen advancing to 73 Friday and making it to 81 by Saturday, well ahead of the normal mid-September high of 71. New Haven, CT’s Friday high of 64 was seen rebounding to 75 by Friday and reaching 78 Saturday. The normal high in New Haven is 71.

Thursday’s cool temperatures were expected to give way to much milder conditions going into the weekend for New Englanders. “A modest nor’easter moving up the Atlantic coast with rain will briefly disrupt the dry weather and warming trend this week around Boston,” said AccuWeather.com’s Alex Sosnowski. “Earlier concern for rain later Thursday afternoon and night will likely be realized, [and] The combination of rain, a breeze and other conditions may result in [wind chill] temperatures in the upper 40s at times Thursday night. Actual temperatures will be held to the 60s.

“Instead of the storm continuing onward through northern New England, the system is forecast to turn out to sea and diminish Friday into the weekend. By the time the storm departs on Friday, the surrounding air mass will continue to modify. Dry air and clear skies will expand eastward from the Midwest by the weekend.”

Next-day gas prices in California were steady even though renewables continue to make steady inroads to the share of power generation held by natural gas. Industry consultant Genscape said, “solar generation in the California ISO market set a record high of 4,889 MW generated on Sept. 22 in hour 13. [CAISO peak load Thursday is forecast at 36,423 MW]. The growth of renewables in CAISO has been displacing other sources of power, including natural gas. This summer-to-date, renewables have been generating an average 120 GWh/d, a 17% increase from last summer.

The bearish EIA storage report may have collided with options expiration, with options trading winning out. Traders did concede, though, that the steady stream of bearish injections expected over the next few weeks may have been priced into the market and that selling dries up at about the $3.85 level.

Going into Thursday’s report, comparisons to last year’s 82 Bcf injection and the five-year average of 79 Bcf were looking decidedly bearish as most estimates were coming in around 90-plus Bcf with some reaching the century mark. First Enercast calculated a build of 89 Bcf, and analysts at United ICAP were looking for an increase of 97 Bcf. A Reuters survey of 25 traders and analysts revealed a sample mean of 94 Bcf with a range of 88-101 Bcf.

Industry consultant Genscape calculated a build of 100 Bcf and said its estimate is based on a “composite of our supply and demand flow model — which is expecting an 81 Bcf injection — and our adjusted sample of storage facilities — which is predicting a 101 Bcf injection. Last year, 87 Bcf was injected for the same storage week, and the record high for the week was 111 Bcf set in 2011,” the company said in a report.

Bentek Energy’s flow model calculated an increase of 97 Bcf. “With only seven weeks left until the end of October, including this Thursday’s announcement, storage builds will have to average near 87 Bcf per week in order to reach 3.5 Tcf by October’s end,” Bentek said. The firm said it expects inventories will end October close to that mark and continue to rise into November, eclipsing 3.5 Tcf at peak inventory levels.

Traders sensed that even though the market fell initially when the figures were released, it still was able to absorb a near-100 Bcf build rather easily. “Most guys were looking in the 98 Bcf range, so it came in pretty much as expected,” said a New York floor trader. “To get this market moving one way or another there is going to have to be a big weather-related event. If you look at these numbers, these are big for this time of year, but the market did not react so that has to tell you something.”

Others saw the market indicating ongoing bearishness. “The 97 Bcf build for last week was slightly more than the consensus expectation and also bearish relative to the 79 Bcf five-year average for the date,” said Tim Evans of Citi Futures Perspective. “It suggests a somewhat weaker background supply-demand balance that could also contribute to somewhat larger builds for the weeks ahead. The early price reaction suggests some relief that it wasn’t even larger, but this was bearish news in our view.”

Inventories now stand at 2,988 Bcf and are 386 Bcf less than last year and 426 Bcf below the 5-year average. In the East Region 66 Bcf was injected and the West Region saw inventories unchanged. Inventories in the Producing Region rose by 31 Bcf.

The weekly storage report proved to be an excellent test of the Market Profile methodology, and Tom Saal, vice president at INTL FC Stone in Miami, was looking for “pricing targets result[ing] from estimated upward momentum price action. The 50% target, at $3.948, is the easiest target to achieve once the market trades outside its ‘initial balance.’ The weekly ‘initial balance’ is the price range of Monday and Tuesday for pit trading hours only. The October 2014 natural gas contract expires tomorrow…the price looks higher from here,” he said in a Thursday morning report to clients.