Physical natural gas for delivery Wednesday retreated around a dime on average with declines in the Midcontinent, Rockies and California more than offsetting gains at eastern points. 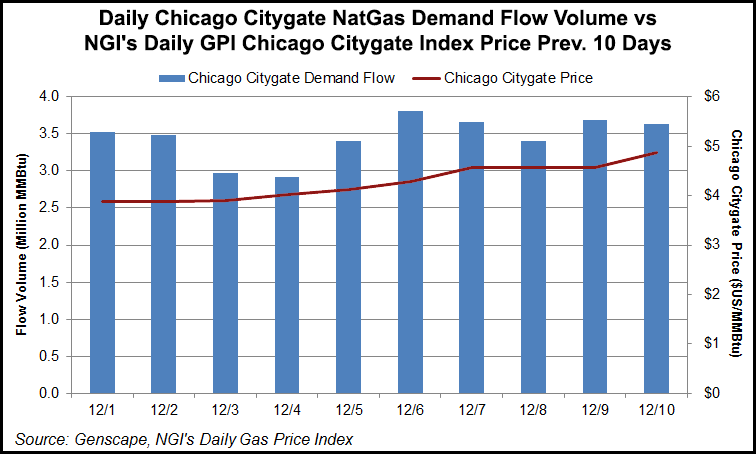 The gains at eastern points were spotty, with some locations adding anywhere from 20 cents to some more than $10. Four New England locations finished the day’s trading in excess of $20. Multi-dollar losses were noted in the Rockies and California as weather forecasts were expected to moderate.

Prices jumped at eastern points as forecasts called for temperatures to trend more than 20 degrees below normal. Forecaster Wunderground.com predicted that the high Tuesday in New York City of 32 would ease to 31 Wednesday before settling in at 26 Thursday, well below the seasonal norm of 45. Philadelphia’s forecast high of 35 Tuesday was anticipated to slide to 29 Wednesday before dropping to 24 Thursday. The normal mid-December high in Philadelphia is 45. Washington, DC’s Tuesday high of 33 was anticipated to rise to 34 Wednesday before plunging to 25 Thursday, more than 20 degrees below the normal high of 48.

Well freeze-offs continued to be a problem, and next-day gas into important market centers rose while prices at points in the Great Plains and Rockies eased. Genscape reported an ominous trend in lost production with production declines reaching 1.564 Bcf/d Sunday, 1.590 Bcf/d Monday, and a whopping 1.858 Bcf/d Tuesday.

Wednesday gas into Alliance rose a dime to $4.90, and deliveries at the Chicago Citygates added 22 cents to $5.09. According to NGI’s Daily Gas Price Index, daily spot prices for gas delivery into Chicago have risen each trading day so far in December, and in the process, have moved from $3.88/MMbtu at the beginning of the month to $5.09 for gas flow on December 11.

Gas for next-day delivery into Northern Natural Ventura eased 45 cents to $5.12, and gas at Demarcation slid 41 cents to $5.10.

“High pressure and snow cover have an ability to surprise guidance to the significantly colder side, and that issue could continue to offer colder risks for the coming days in both the Midwest and newly-snowed East. Otherwise, the six-10 and 11-15 are not as cold as the one-five day, but still offer plenty of cold weather opportunities yet. The latest round of modeling still shows plenty of cold air in Canada, but some increase in warmer Southeast ridging in the 11-15 day could expand into the Mid-Atlantic and Northeast, too at times. Ridging in the east Pacific still acts as a ‘gatekeeper’ preventing a bigger Pacific warm flow and allowing cold air entry yet.”

Traders see the market as overextended. “This market continues to surge higher off of weather considerations where focus has shifted from the demand to the supply side,” said Jim Ritterbusch in closing comments to clients Monday. “Since we didn’t see anything within the weekly updates to the short-term temperature views as capable of forcing fresh highs, we are proceeding on the assumption that widespread well freeze-offs due to the adverse weather conditions drove much of today’s advance with power outages providing some offset.

“Although [Monday’s] advance carried further than we had anticipated, we have allowed for the fact that limited chart resistance develops until about the $4.30 level. Although we have shifted from a short-term bullish to a neutral stance since we are viewing current price levels as unsustainably high, we will nonetheless caution against attempts to pick a top to this strong rally of the past month.”