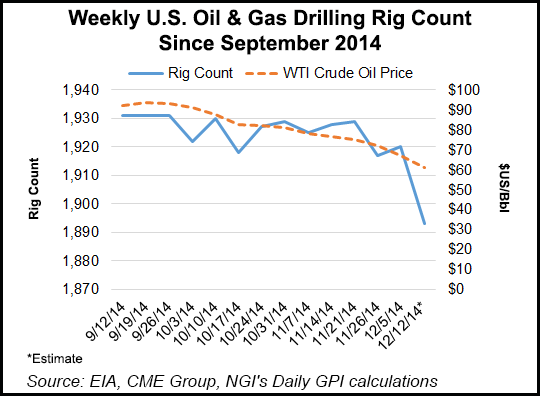 The greatest declines were seen at New England locations, but losses of a few pennies to a dime were pervasive. The Rockies was one of the few regions to show some strength, adding just a few pennies. Overall, the market shed 15 cents. Futures posted double-digit gains as traders noted weather forecasts calling for a cold incursion late in the month, but few desired to hold a short position over a weekend in December. At the close, January had added 16.1 cents to $3.795 and February was higher by 15.3 cents to $3.816. January crude oil continued to post new five-year lows, plunging $2.14 to $57.81/bbl.

Weekend and Monday parcels in New England, the Mid-Atlantic, Marcellus and Appalachia all were in the loss column as power loads Monday were seen lower and peak power prices ebbed. IntercontinentalExchange reported that Monday peak power at ISO New England’s Massachusetts Hub fell $7.66 to $53.05/MWh. Peak power at the PJM West terminal eased 33 cents to $36.65/MWh.

The National Weather Service in suburban Philadelphia reported that “a persistent area of low pressure over the Canadian Maritimes will gradually move east over the weekend as high pressure from the Tennessee River valley builds over the region Sunday and Monday. A cold front is forecast to cross the middle-Atlantic region late Tuesday, followed by another area of high pressure later in the week.

“Saturday is shaping up to be a fairly nice day. We should start to see the sun break out from behind the clouds as the high to our southwest starts to push more toward the region. The gradient between the high and the departing low will still continue to be fairly tight and this means we will have some gusty winds to contend with through the afternoon. Temperatures will be slightly warmer than they were today as the air mass continues to modify. Highs will be in the low to middle 40s across the region with some 30s across the Poconos and the higher terrain of northwestern New Jersey.”

Rockies locations managed to avoid the weaker pricing seen elsewhere. On CIG Mainline, weekend and Monday gas came in 4 cents higher at $3.38, and at the Cheyenne Hub packages changed hands flat at $3.36. Gas at the Opal Plant tailgate was down a penny to $3.40, and gas on Northwest Pipeline WY added 3 cents to $3.38.

“Ultimately you will see higher prices in natgas. It was just a question of when traders were going to pull the trigger,” said a New York floor trader.

On a more fundamental note in its morning outlook, Natgasweather.com said Thursday’s storage report will not be able to hold a candle to upcoming storage reports expected to make significant inroads to the short- and long-term storage shortfalls.

“Deficits were able to gain 20 Bcf on supplies, but it will pale in comparison to the impressive amount of ground that will be made up when next week’s draw comes in significantly lighter than the five-year average. These light draws are clearly bearish for prices, and if the string is going to end, colder temperatures would need to arrive after Dec. 22 as weather patterns until then will just not be nearly cold enough over enough of the U.S. to be significant,” the firm said.

“The weather system for next week over the Midwest will be fairly chilly, but the truly cold arctic air will remain confined over the northern U.S. We still expect how weather patterns shape up going into the last week of December very well could dictate the future direction of natgas prices. We still like colder temperatures returning sometime around or just after Dec. 22-24 as the gates holding very cold arctic air over northern Canada begin to open, although the weather models continue struggling on how much cold air the first weather system or two will tap as they track through the Midwest and Northeast. But even if the first systems fails to grab a significant amount, the next several that line up to follow will have better chances.”