A dozen senators — 11 Democrats and one left-leaning independent, led by Sen. Ed Markey (D-MA) — representing eight East Coast states, are urging the Obama administration to shelve plans to open Atlantic Ocean waters to natural gas and oil drilling, which they say would unnecessarily endanger their states’ economic well being. 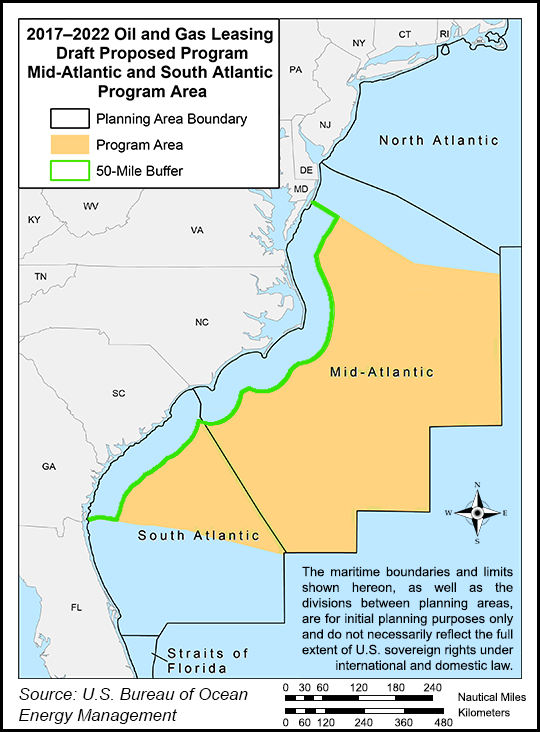 “Offshore drilling anywhere in the Atlantic has the potential to impact our states’ fishing, tourism and recreation industries, our coastlines and our environment,” the senators said in a letter sent to Department of Interior (DOI) Secretary Sally Jewell. “These industries that rely on a healthy coastal ecosystem generate billions of dollars a year in economic activity for our states and would be severely threatened by offshore drilling anywhere in the Atlantic.”

A draft strategy for offshore oil and natural gas leasing, released earlier this year by Jewell and Bureau of Ocean Energy Management Director Abigail Ross Hopper, includes for the first time a portion of the Mid- and South Atlantic outer continental shelf (OCS) from Virginia to Georgia (see Daily GPI, Jan. 27). The Draft Proposed Program seeks public comment on 14 potential lease sales in eight planning areas: 10 sales in the Gulf of Mexico (GOM), three off the coast of Alaska, and one, late in the 2017-2022 program, in areas offshore Virginia, North and South Carolina and Georgia.

Just as the BP plc Macondo well blowout and oil spill in 2010 threatened coastlines around the GOM, drilling in the Atlantic would put the coastlines of all east coast states at risk, the senators said.

“As we saw just a few years ago, offshore oil spills do not respect artificial state boundaries and a spill in the Atlantic could affect our states,” they said.

And opening the Atlantic OCS to drilling isn’t needed “when the oil and gas industry is currently sitting on tens of millions of acres of public land offshore on which it is not yet producing oil,” according to the senators.

Seismic studies of the southern and mid-Atlantic coast proposed last year by the Obama administration (see Daily GPI, July 21, 2014) have yet to be completed, the lawmakers said.

“While we believe that this proposed offshore seismic testing is extremely harmful to marine life and the environment and we strongly oppose seismic testing in the Atlantic, it is premature and even more dangerous to propose moving forward with leasing off the Atlantic Coast when DOI has not even completed this process and the National Oceanic and Atmospheric Administration is still reviewing the severity of the adverse impacts associated with seismic testing.”

Offshore oil and natural gas leasing in the eastern GOM and the U.S. Atlantic and Pacific coasts — areas now almost entirely off limits to development — could raise more than $200 billion in revenue and create nearly 840,000 jobs by 2035 if leasing were to begin in 2018, according to one recent study (see Daily GPI, Nov. 19, 2014).