After a scorching end to May, temperatures eased a bit for the first week of June, sending natural gas demand and prices lower for the June 3-7 period. Led by steep declines in the Rockies and the Midwest, the NGI Spot Gas Weekly National Avg. fell 7.5 cents to $1.955. 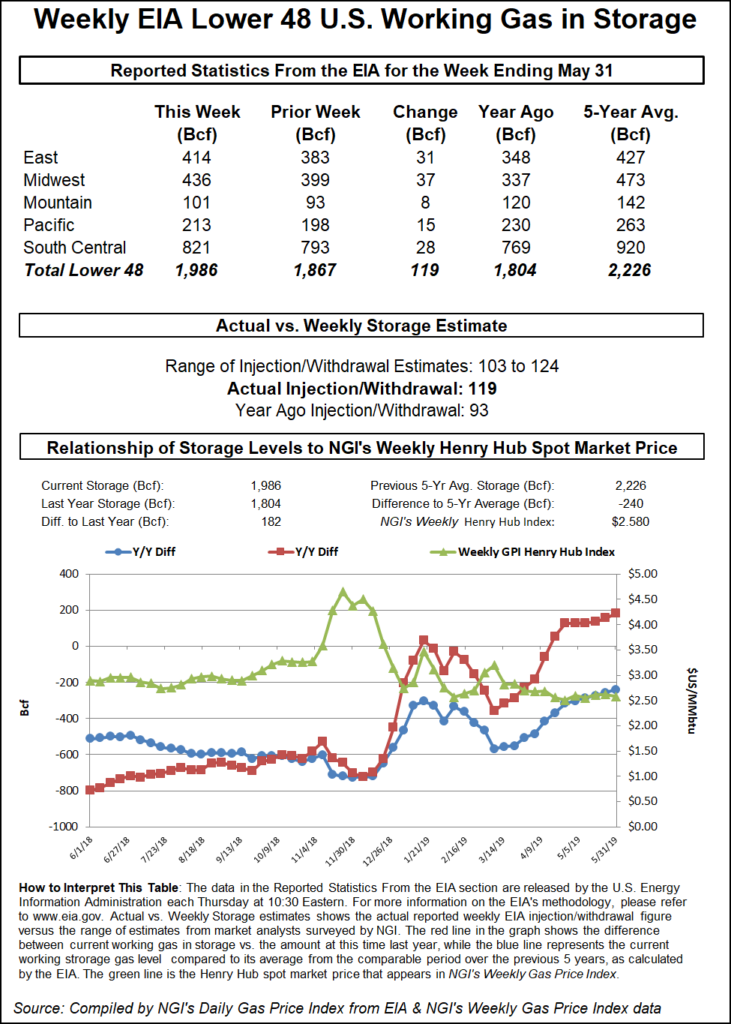 The dramatic falls occurred as temperatures across much of the western United States averaged 3 to 7 degrees above normal, according to AccuWeather. That’s set to change next week, however, as a storm system will cool the region down quite a bit, sending daytime temperatures as much as 15 degrees below their normal highs in the upper 60s to lower 70s.

“Warmth will even be trimmed as far south as central California, where portions of the San Joaquin Valley reached 100 on Wednesday for the first time this year. Fresno, California, had its first 100-degree day of the year on Wednesday, but high temperatures trended back to the 80s on Friday,” AccuWeather meteorologist Ryan Adamson said.

Given ongoing pipeline import and storage limitation, SoCal Citygate managed to strengthen during the five-day period, climbing 11.5 cents to $2.60.

Meanwhile, Kern River Gas Transmission declared a force majeure that cut operational capacity through the Goodsprings compressor to around 1.8 Bcf/d through June 12. While this does not present an immediate risk to flows, which have averaged 1.5 Bcf/d so far this month, it does present moderate risk should downstream demand spike, according to Genscape Inc.

Across the country in the Northeast, prices dropped between 10 and 20 cents on the week, with similar declines seen in Appalachia.

On the pipeline front, a force majeure remained in place on Columbia Gas Transmission (TCO). The pipeline provided an update Tuesday to the forces majeure at “LXPSEG” and “MXPSEG”, with the TCO stating that it expects them to remain in effect through at least June 6. The pressure reduction, downstream of the Summerfield Compressor Station which led to the restrictions at LXPSEG and MXPSEG, was necessary due to results obtained from pigging on “Line LEX,” Genscape analyst Anthony Ferrara said.

TCO has indicated it is still evaluating next steps and will provide further updates as additional information becomes available.

Weekly prices across the rest of the United States also softened during the June 3-7 period as demand remained light with various storms moving across the country.

The exception was out in West Texas, where the end of a pair of maintenance events on Natural Gas Pipeline Co. of America and El Paso Natural Gas lifted prices that had been struggling in recent weeks.

While cash prices softened throughout much of the week, Nymex futures sunk to lows not seen since early June 2016 as weather models continued to keep intimidating heat at bay for most of June. Long-term forecasts trended cooler for much of this week and although the latest data turned slightly warmer, the overall weather pattern is expected to remain below normal in terms of demand, according to Bespoke Weather Services.

“Of note is some improvement in the upper level patterns in the modeling,” Bespoke chief meteorologist Brian Lovern said. This was reflected especially in the American data but somewhat in the others as well, “which makes us feel like there is some warmer risk to forecasts starting late next week.”

While the pattern doesn’t look like it would move to “hot”, it would at least be not as cool and could get the market back to normal, according to Bespoke. The firm has noted this warmer trend setting up around June 20, with the tropical forcing shifts, “so it may be that models are gradually starting to latch on to that. As always, it will be an important weekend in the world of weather model watching to see which direction it decides to move.”

Indeed, prices sank to a fresh three-year low on Thursday after the Energy Information Administration (EIA) reported another hugely bearish storage report. The EIA reported a 119 Bcf storage injection for the week ending May 31.

Compared to degree days and normal seasonality, the 119 Bcf injection was about 4.5 Bcf/d loose versus the five-year average, including an estimated 7 Bcf impact for the week due to the Memorial Day holiday, according to Genscape Inc. Total power generation was up around 10 average gigawatt hours (AGWH) compared to the previous week.

Nonthermal generation declined around 10 AGWH, while coal was up around 4 AGWH week/week. Gas was up around 16 AGWH for an estimated 2.8 Bcf/d more gas burn week/week, Genscape analysts Eric Fell and Margaret Jones said.

This was the second week in a row in which the EIA delivered a large bearish miss, and the data put plump U.S. supplies on full display. With inventories sitting at 1,986 Bcf, stocks are now 182 Bcf above last year’s levels and 240 Bcf below the five-year average, according to EIA.

Even with another triple-digit storage injection expected next week, market bulls are likely to have the upper hand again soon, according to EBW Analytics. “With weather-driven demand expected to rise by 6 Bcf/d over the next three weeks and projected end-of-injection-season storage just a smidge above 3,400 Bcf, we expect gas prices to strengthen significantly before the July contract goes off the board on June 26.”

After closing 1.3 cents higher on Friday, the July Nymex contract finished the week at $2.337, which was still down 6.6 cents from Monday.

Permian Basin spot gas prices remained on the upswing Friday despite an otherwise overwhelmingly bearish cash market. While most other regions saw declines of up to 20 cents or so, West Texas tacked on a few more cents to this week’s gains.

Steeper declines were seen in the Midcontinent, where Southern Star plunged 33.5 cents to $1.755. Midwest prices also softened, although declines were limited to a dime at the majority of pricing hubs.

Rockies Express Pipeline (REX) was set to begin planned maintenance Monday at the interstate interconnect with Natural Gas Pipeline Co. of America (NGPL) in Illinois, limiting up to 273 MMcf/d of deliveries. For this one-day-only maintenance event, operating capacity at the “NGPL/REX MOULTRIE” interconnect (meter 44413) will be limited to 1,093 MMcf/d.

Over the 14 days leading up to Friday, this location has averaged deliveries of 1,293 MMcf/d and maxed at 1,371 MMcf/d, leading to a cut of up to 273 MMcf/d, according to Genscape.

Smaller losses were seen throughout Louisiana and the Southeast, while Appalachia prices were down as much as 20 cents at Transco-Leidy Line, which slid to $1.89.

Out West, dramatic losses were seen at SoCal Citygate, where spot gas plunged 80 cents to $1.86. Over in the Rockies, CIG DJ Basin cash hung on to its $1 handle by a thread after falling some 15.5 cents day/day.

After a third environmental assessment, the Washington Department of Ecology has denied a shoreline permit for a China-backed, $2 billion-plus natural gas-fed methanol plant that would be sited along the Columbia River. Project sponsor Northwest Innovation Works (NWIW) has until Feb. 9 to appeal the ruling made last Tuesday. Chief Development Officer Vee Godley said…