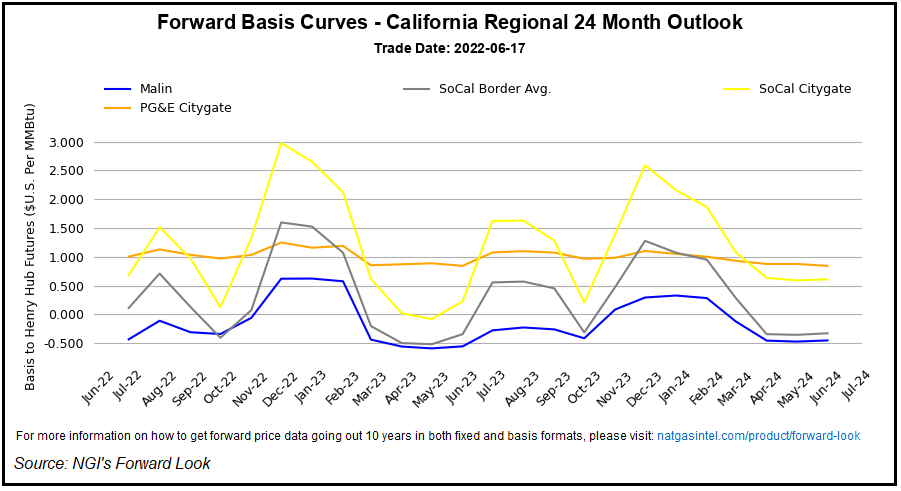 With the news last week that feed gas demand is to remain stunted for several months following the explosion at the Freeport liquefied natural gas (LNG) facility, weather on Sunday moved to the forefront of trading Losses escalated at the start of Tuesday’s session as traders weighed a significant loss of cooling degree days in the weekend weather models, particularly at the end of June and into early July. However, NatGasWeather pointed out that the pattern for the coming two weeks is not bearish, it’s just “not as bullish” as previous models had projected.

The forecaster said excruciating heat is set to remain in place for the rest of this week, with highs of 90s to lower 100s spreading from Texas to the Great Lakes to the Mid-Atlantic Coast. Sweltering temperatures also are forecast over the west-central United States.

By Sunday, though, cooler trends are expected amid weather systems sweeping across the Midwest and East, holding daytime temperatures in the 60s to 80s. This may help to shift the hot upper ridge across the west-central United States, according to NatGasWeather. As such, national demand is expected to be “regionally strong.”

The overnight data favored a return to a more intimidating pattern July 2-7 as the hot ridge expands back toward the East. However, it’s far enough out in time where changes should be expected, according to the forecaster.

“With LNG exports plummeting due to the Freeport LNG outage, any lost demand had the potential to disappoint, and that’s what happened at the Sunday reopen,” NatGasWeather said.

However, the forecaster said the market became technically oversold after a more than $2.00 decline over the past five trading sessions. Strong power burns this week, coupled with light wind generation, also likely aided the afternoon rally.

“Going forward, we expect a prolonged battle between tight U.S. supplies and hotter-than-normal weather patterns most days this summer versus bearish LNG exports due to the Freeport LNG outage,” NatGasWeather said. “Bulls have bought every dip for more than a year, and they did so again” on Tuesday.

Is Gas Losing Its Luster?

EBW Analytics Group noted that Freeport’s announcement that its facility would remain at least partially offline for several months drained the number of bullish speculative traders, already on the decline in recent weeks, even further.

The latest Commodity Futures Trading Commission data showed natural gas net long positioning tumbling nearly in half week/week as of June 14. This was the second largest one-day decline, according to EBW. The firm said bullish positions were on the chopping block  after news of Freeport’s extended 90-day outage lifted the end-of-October storage target above 3.5 Tcf.

Speculator net long positioning declined to the lowest level since March 2020 and only the 26th percentile since 2010, according to EBW. Rubin said choppy trading is likely as the market continues to absorb last week’s “monumental” reshaping of the 2022 injection season.

Hefty losses continued for spot gas prices at the start of the week despite the continuation of stifling heat and humidity across large swaths of the country.

By Wednesday, the core of the most anomalous heat was expected to shift to the Southeast, where daytime temperatures could reach the triple digits and potentially result in fresh records. Northern California also is expected to warm, while unusually cooler conditions are forecast over New Mexico and other parts of the Southwest because of extensive cloud cover, NWS said. The Northeast is forecast to be a mixed bag. NWS said much of New England and the immediate Mid-Atlantic coast would struggle to get above 80, while neighbors farther south and west see temperatures rise as high as the low 90s by Wednesday.

As for prices, some of the steepest decreases were seen on the East Coast. In Appalachia, Eastern Gas South next-day gas plunged 67.5 cents from Friday to average $5.735. Transco Zone 6 non-NY dropped 54.5 cents to $5.755. New England prices, meanwhile, maintained a $6.00 handle.

Meanwhile, pipeline maintenance was ongoing along several systems this week. Among the more notable events was a hydrotest being performed on Northwest Pipeline (NWPL) through the section between the Willard and Goldendale compressors. The work is scheduled from Tuesday through July 4, cutting up to 134 MMcf/d of northbound flows.