Physical natural gas for Friday delivery plunged across a broad front in Thursday’s trading as energy demand was forecast to weaken and power prices plunged. 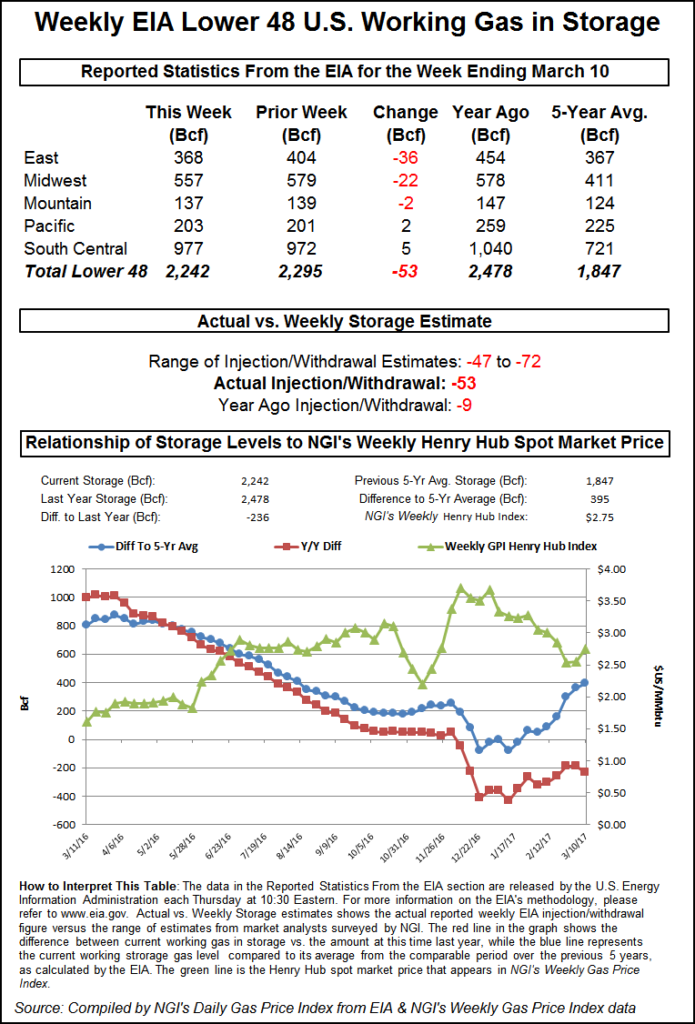 No point followed by NGI made it into the black, and the NGI National Spot Gas Average spiraled lower by 32 cents to $2.81. Outside of the Northeast, Appalachia and the Southeast, most prices fell by a dime to 15 cents.

The Energy Information Administration (EIA) reported a storage withdrawal of 53 Bcf for the week ending March 10, slightly less than expectations, and that added to the bearish tonality to the day’s trading as well. At the close April had fallen 7.9 cents to $2.902 and May was down 7.3 cents to $2.967. April crude oil weakened 11 cents to $48.75/bbl.

Prior to the report, Ritterbusch and Associates was looking for a 52 Bcf withdrawal, and analysts at ICAP Energy calculated a 57 Bcf decline. A Reuters survey of 20 traders and analysts showed an average 56 Bcf pull with a range of 47 Bcf to 72 Bcf. Last year a measly 9 Bcf was withdrawn, but the five-year pace for the week is an 85 Bcf pull.

“The net withdrawal of 53 Bcf was less than the consensus for a 56-57 Bcf draw and below the 85 Bcf five-year average decline, and so moderately bearish,” said Tim Evans of Citi Futures Perspective. “While this implies a somewhat weaker overall supply-demand balance, in the current era it’s hard to tell whether a shift in trade flows, such as a delay in LNG export shipments, may have been the cause.”

Others were also in the bear camp. “We believe the storage report will be viewed as slightly negative,” said Randy Ollenberger, an analyst with BMO Capital Markets. “Storage is trending below last year’s levels; however, rising associated gas production should keep U.S. storage levels at or above five-year averages assuming normal weather.”

Inventories now stand at 2,242 Bcf and are 236 Bcf less than last year and 395 Bcf greater than the five-year average. In the East Region 36 Bcf was withdrawn, and the Midwest Region saw inventories decrease by 22 Bcf. Stocks in the Mountain Region fell 2 Bcf, and the Pacific Region was up 2 Bcf. The South Central Region added 5 Bcf.

In physical trading, estimates of reduced energy demand across the country made it more difficult to justify incremental gas purchases. Peak power load across the broad PJM footprint was expected to drop to 39,300 MW Friday from Thursday’s 39,809 MW, according to PJM Interconnection. California was little different. CAISO predicted Thursday’s peak load of 28,705 MW Thursday would slide to 27,759 MW Friday.

Market technicians see the bulls as having some work to do. “Unless the bulls can promptly better the $3.089 high [Monday], we would be ready for a deeper retracement of the $2.522 to $3.089 advance from here,” said Brian LaRose of United ICAP. “At this point it should not take much to set a deeper retreat in motion, a break beneath Wednesday’s $2.923 low ought to do the trick. As a reminder, we will be treating any slide from the highs as corrective in nature for the time being.”

Near-term weather forecasts moderated. WSI Corp. in its Thursday morning report said, “The latest six-10 day period forecast is warmer than [Wednesday’s] forecast across the majority of the CONUS. CONUS GWHDDs are down 5.3 to 92.1 for the period.

“Any small shift with a sharp cold front and details with a storm system can cause the forecast to swing in either direction, especially on a localized/regional basis. The north-central U.S. and the southwestern U.S. have colder risks, but the southern U.S. could run even warmer.”